Local time in Thatta is now 02:26 AM (Thursday) . The local timezone is named " Asia/Karachi " with a UTC offset of 5 hours. Depending on your mobility, these larger cities might be interesting for you: Goth Tanka Meman, Tando Muhammad Khan, Tando Allahyar, Sukpur, and Sukkur. When in this area, you might want to check out Goth Tanka Meman . We discovered some clip posted online . Scroll down to see the most favourite one or select the video collection in the navigation. Are you looking for some initial hints on what might be interesting in Thatta ? We have collected some references on our attractions page.

Lake along with Kalaan Kot Fort

Miilions of Ruppes has been spent on Construction of Roads of Thatta City but nothing positive..MPG

Mr Ayaz Latif Palijo in Relly against Zulifkarabad in Thatta 1

Thatta,, is a city and capital of Thatta District. It is a historic town of 220,000 inhabitants in the Sindh province of Pakistan, near Lake Keenjhar, the largest freshwater lake in the country. Thatta's major monument, the necropolis at Makli is listed among the World Heritage Sites. The Shah Jahan Mosque, Thatta is also mentioned separately on the tentative list since 1993.

The Samma Dynasty ruled in Sindh and parts of Punjab and Balochistan from 1335–1520 AD, with their capital at Thatta in modern Pakistan before being replaced by the Arghun Dynasty. Samma Dynasties was not only limited within the region of Sindh but in large area of Kutch and Gujarat Samma's were ruled(In Saurashtra earlier known as Halar and Kathiyavad) and many of Sammas are living here today's and fulfill the Hinduism till era of lots of years.

Makli Hill is one of the largest necropolises in the world, with a diameter of approximately 8 km. It lies approx. 98 km east of Karachi and is the burial place of some 125,000 local rulers, Sufi saints and others. Makli is located on the outskirts of Thatta, the capital of lower Sindh until the seventeenth century, in what is the southeastern province of present-day Pakistan. It was inscribed on the World Heritage List in 1981 under the name of Historical Monuments of Thatta.

Hadero Lake is located in Thatta District, Sindh, Hudero is important brackish water wetland of Sindh, where variety of waterfowl prefer to pass their time. It is at Hudero that one is more likely to see Swans, Storks, Crans and feeding flocks of Pelicans. It is considered one of the favourite lake of orionthologist. Hudero was declared wildlife sanctuary with objects to conserve and protect the natural environment in and around the lake for different migratory and resident birds.

Haleji Lake is located in Thatta District, Sindh, Pakistan. It is the Asia's largest bird sanctuary. 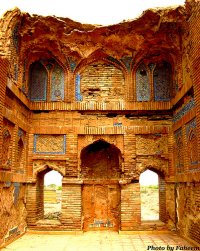 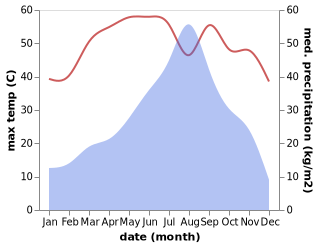