Current time in Iloilo is now 07:00 AM (Thursday) . The local timezone is named " Asia/Manila " with a UTC offset of 8 hours. Depending on the availability of means of transportation, these more prominent locations might be interesting for you: Zarraga, Toboso, Tigbauan, Talisay City, and Taguig City. Since you are here already, make sure to check out Zarraga . We encountered some video on the web . Scroll down to see the most favourite one or select the video collection in the navigation. Where to go and what to see in Iloilo ? We have collected some references on our attractions page.

Welcome Back To Iloilo , Myrtle! Part 1

The homecoming of the Pinoy Big Brother Teen Edition 4 Teen Big Winner, MYRTLE SARROSA at the University of the Philippines in the Visayas (Iloilo City Campus). ..

Iloilo Jeepneys Part 2 - you can only see these pieces of art in Iloilo in a very different way. Its unique design and practical use as transport for Ilonggos make it a part of their everyday lives. C ..

Robinsons Place Iloilo is a shopping mall owned and operated by Robinsons Malls, the second largest mall operator in the Philippines. It is the third mall opened and the largest among Robinsons malls in the Visayas and Mindanao Regions. It is bordered by the main thoroughfares De Leon, Ledesma, Mabini and Quezon Streets.

Assumption Iloilo (also known as AC or the Assumption Convent) is a Catholic school in General Luna St. , Iloilo City, Philippines. It was founded by the Sisters of the Assumption in 1910. It offers preschool, grade school, and high school education for males and females.

Iloilo Sports Complex is a multi-use stadium in La Paz District, Iloilo City, Philippines. It is currently used mostly for football matches and hosts the home matches of Iloilo F.A. regional team. It is the venue of major athletic events in the Province and the Region and occasionally hosts large gatherings such as concerts.

Mandurriao Airport, also known as Iloilo Airport during its operation, was the main airport serving the area of Iloilo City and the province of Iloilo in the Philippines. The airport was located five kilometers northwest of downtown Iloilo City in the district of Mandurriao. The airport was the fourth-busiest airport overall and the busiest domestic airport in the Philippines, accommodating over 700,000 passengers and over 5,000 tons of cargo in 2005. 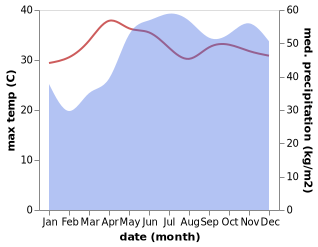