Current time in Płock is now 11:51 AM (Thursday) . The local timezone is named " Europe/Warsaw " with a UTC offset of 1 hours. Depending on the availability of means of transportation, these more prominent locations might be interesting for you: Kaliningrad, Warsaw, Włocławek, Tokary Rabierz, and Słupno. Since you are here already, make sure to check out Kaliningrad . We encountered some video on the web . Scroll down to see the most favourite one or select the video collection in the navigation. Where to go and what to see in Płock ? We have collected some references on our attractions page.

THE MOST IMPORTANT PLACE IN THE WORLD

THE PLOCK (PŁOCK) CITY (POLAND) IS MOST IMPORTANT PLACE AND CITY IN THE WORLD Second Sunday Easter is celebrated as Divine Mercy Sunday in Catholic Church. In this place the Sister Faustina Kowalska h ..

Płock is a city in central Poland, on the Vistula river. According to the data provided by GUS on 30 June 2009 there were 126,675 inhabitants. It is located in the Masovian Voivodeship (since 1999), having previously been the capital of the Płock Voivodeship (1975–1998). It now is a capital of a Powiat (county) at the extreme west of the Mazovian Voivodeship. In years: 1079 - 1138 Płock was capital of Poland. Płock is also a historical capital of Mazovia.

Płock Cathedral, or the Cathedral of the Blessed Virgin Mary of Masovia, in Płock, is a Roman Catholic cathedral in Poland, an example of Romanesque architecture.

Temple of Mercy and Charity

The Temple of Mercy and Charity (Polish: Świątynia Miłosierdzia i Miłości) is a Mariavite cathedral in Płock in central Poland. It is located near the Vistula River.

Kazimierz Gorski Stadium is a multi-use stadium in Płock, Poland. It is currently used mostly for football matches and is the home ground of Wisła Płock. The stadium holds 10,978 people and was built in 1947. It is named after Kazimierz Górski.

Nowe Boryszewo is a village in the administrative district of Gmina Radzanowo, within Płock County, Masovian Voivodeship, in east-central Poland. 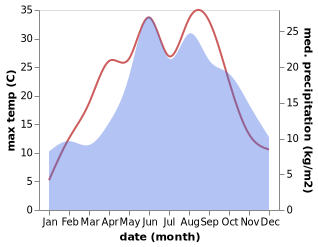