Local time in Gliwice is now 10:50 PM (Monday) . The local timezone is named " Europe/Warsaw " with a UTC offset of 1 hours. Depending on your flexibility, these larger cities might be interesting for you: Oradea, Warsaw, Budapest, Bratislava, and Ostrava. When in this area, you might want to check out Oradea . We found some clip posted online . Scroll down to see the most favourite one or select the video collection in the navigation. Are you looking for some initial hints on what might be interesting in Gliwice ? We have collected some references on our attractions page.

Silesian University of Technology is a university located in Gliwice, Silesia, Poland. It was founded in 1945 by Polish professors of the Lwow Polytechnic, who were forced to leave their native city and move to the Recovered Territories.

The so-called Piast's Castle in Gliwice, southern Poland dates back to the mid-14th century. It consists of a tower from 1322, which was originally part of the city walls, and an adjoining building which was probably an armory. Modifications were carried out in the 15th century, between 1558-61 it became the residence of Friedrich von Zettritz. Later it was an armory, a jail, a magazine and since 1945 a museum. Between 1956-59 it was thoroughly rebuilt and partially reconstructed.

Gliwicki Klub Sportowy Piast Gliwice is a Polish football club based in Gliwice, Poland. Founded in June 1945 by the Poles who had been forced to leave their homeland in present-day Western Ukraine, Piast's football team played as many as 32 seasons in the Polish Second Division, before finally being promoted to the Ekstraklasa in 2008. Having played two seasons in the top division, the club was relegated in 2010.

Stadion Miejski w Gliwicach is a football stadium in Gliwice, Poland. It is the home ground of Piast Gliwice. The stadium holds 10,037 spectators. 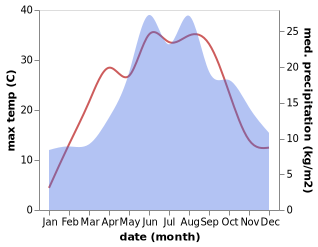