Delve into Khurba in Russia

Current time in Khurba is now 07:28 PM (Thursday) . The local timezone is named " Asia/Vladivostok " with a UTC offset of 11 hours. Depending on your travel modalities, these larger destinations might be interesting for you: Sandinka, Novyy Mir, Komsomol'sk-na-Amure, Khurba, and Khabarovsk. While being here, make sure to check out Sandinka . We encountered some video on the web . Scroll down to see the most favourite one or select the video collection in the navigation. Are you curious about the possible sightsseing spots and facts in Khurba ? We have collected some references on our attractions page.

Khurba (also given as Komsomolsk South, Khurba, Hurba, Uchastok, and Kalinovka) is an air base (also used as an airport) in Khabarovsk Krai, Russia 17 kilometres south of Komsomolsk-na-Amure. This medium-sized base has considerable tarmac space and an extended area of revetments. It handles medium-sized airliners. Units stationed at Komsomolsk-na-Amur/Khurba include: 277 BAP (277th Bomber Aviation Regiment) flying Su-24 aircraft in the 1990s.

Dzemgi Airport is an air base in Khabarovsk Krai, Russia located 8 kilometres northeast of Komsomolsk-na-Amure. Dzhemgi is Komsomolsk-na-Amure's northeast side airport, handling small airliner traffic. The airport is also the site of a major Sukhoi plant (GAZ 126), built in 1934, where the Sukhoi Su-7 and later models have been built. 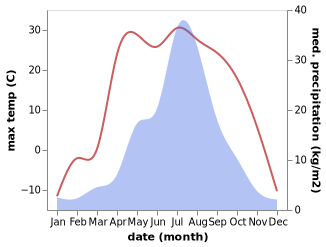