Current time in Ryazan is now 08:37 AM (Tuesday) . The local timezone is named " Europe/Moscow " with a UTC offset of 4 hours. Depending on the availability of means of transportation, these more prominent locations might be interesting for you: Zaokskoye, Vladimir, Tambov, Shumash', and Sekiotovo. Since you are here already, make sure to check out Zaokskoye . We saw some video on the web . Scroll down to see the most favourite one or select the video collection in the navigation. Where to go and what to see in Ryazan ? We have collected some references on our attractions page.

CSK Stadium (Russian: Stadion Tsentral'nogo Sportivnogo Kompleksa) is a stadium in Ryazan, Russia. The stadium opened in 1980, and was formerly the home of the now defunct local football teams FC Spartak-MZhK Ryazan and FC Ryazan. It is currently the home of FC Zvezda Ryazan. CSK was most recently refurbished in 2008, and is now a 25,000 capacity all-seater stadium, with a running-track for athletics.

The Ryazan State University named for S. A. Yesenin (Russian: Рязанский государственный университет имени С. А. Есенина) is a university in Ryazan, Ryazan Oblast, Russia. It was founded in 1915. It bears the name of Russian poet Sergei Yesenin, who grew up in the region.

Dyagilevo (also given as Dyagilevo, Ryazan Dyagilevo) is an air base in Ryazan Oblast, Russia located 3 km west of Ryazan. It has served as a training center for Russia's strategic bomber force. In 1955 it was only one of 6 Soviet bases capable of handling the Myasishchev M-4 bomber. In 1967 it had 7 Tupolev Tu-22 used for training. In 1973 it received 2 Tu-22M0 aircraft.

Turlatovo Airport is an airport in Ryazan Oblast, Russia located 10 km southeast of Ryazan. It is a small civilian airstrip, currently with no regular flights. Used for parachute sports, training and occasional small aviation flights.

Rybnoye is a town and the administrative center of Rybnovsky District of Ryazan Oblast, Russia, located on the Vozha River 18 kilometers northwest of Ryazan. Population: 18,380; 19,150; 18,672. It was first mentioned in 1597 as a settlement of Rybnino (Ры́бнино) and was granted town status in 1961. 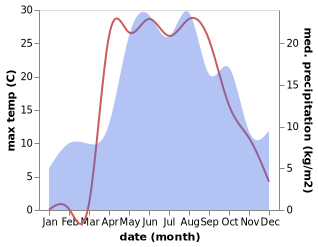