Current time in Tambov is now 08:01 AM (Tuesday) . The local timezone is named " Europe/Moscow " with a UTC offset of 4 hours. Depending on the availability of means of transportation, these more prominent locations might be interesting for you: Voronezh, Vladimir, Tula, Tambov, and Ryazan. Since you are here already, make sure to check out Voronezh . We saw some video on the web . Scroll down to see the most favourite one or select the video collection in the navigation. Where to go and what to see in Tambov ? We have collected some references on our attractions page.

The Tambov Rebellion (Soviet misnomer Antonovshchina) which occurred between 1920 and 1921 was one of the largest and best-organized peasant rebellions challenging the Bolshevik regime during the Russian Civil War. The uprising took place in the territories of the modern Tambov Oblast and part of the Voronezh Oblast, less than 300 miles southeast of Moscow.

Tambov is an air base in Russia located 4 km southwest of Tambov. It is a bomber training base with many Tupolev Tu-134UBL aircraft. Yefim Gordon's MiG-23/27 book refers to a 652 UAP (652nd Aviation Training Regiment) stationed at Tambov/Vostochnyy flying 96 Aero L-29 Delfin, but Vostochny is Russian for "east", which may refer to the civilian Tambov Donskoye Airport rather than this southwest airfield. Tambov is also home to 4255 BRS flying MiG-23 aircraft.

Tambov Donskoye Airport is an airport in Russia located 10 km northeast of Tambov.

HVDC Ekibastuz–Centre is an unfinished HVDC transmission line between Ekibastuz in Kazhakstan and Tambov (Centre substation) in Russia whose construction was started in 1978. It was planned to have a length of 2,414 kilometres, which would have made it the longest powerline of the world with a maximum transmission rate of 6,000 MW and a transmission voltage of 750 kV between conductor and ground (respectively 1,500 kV between conductors). 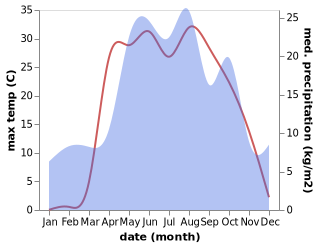