Local time in Lipetsk is now 07:07 AM (Thursday) . The local timezone is named " Europe/Moscow " with a UTC offset of 4 hours. Depending on your flexibility, these larger cities might be interesting for you: Zhëltyye Peski, Zarech'ye, Voronezh, Tula, and Tambov. When in this area, you might want to check out Zhëltyye Peski . We found some clip posted online . Scroll down to see the most favourite one or select the video collection in the navigation. Are you looking for some initial hints on what might be interesting in Lipetsk ? We have collected some references on our attractions page.

Russia. Walking through the of Lipetsk city (Липецк)

The Battle of Lipitsa was the decisive battle in the succession struggle over the Grand Princely throne of Vladimir-Suzdal following the death of Vsevolod the Big Nest. In the battle, fought on April 22, 1216, the forces of Mstislav the Daring and Konstantin Vsevolodovich defeated those of Konstantin's younger brothers Yuri Vsevolodovich and Yaroslav. Konstantin took the throne of Vladimir and reigned as grand prince until his death two years later.

Matyra is a river in Tambov and Lipetsk Oblasts of Russia. It is a left tributary of the Voronezh River (in the Don's drainage basin), and has a length of 180 km and a drainage basin of 5,180 km². The average discharge 39 km from its mouth is 11.7 m³/s. The town of Gryazi is situated by the Matyra River. A reservoir was created on the river in 1976.

Lipetsk Air Base (also given as Lipetskiy, Lipetsky, Shakhm 10, and Lipetsk West) is an air base in Lipetsk Oblast, Russia located 12 km northwest of Lipetsk. It is the combat training center of Russian Air Force, analogous to the U.S. Air Force's Nellis Air Force Base. The base is made up of two medium-sized airfields joined together. In 1925, the Soviet government allowed Germany to open an air combat school at Lipetsk.

Lenino is a village in Lipetsky District of Lipetsk Oblast, Russia, located on the right bank of the Voronezh River. In the 17th century peasants of boyars Romanovs founded the village (selo) of Romanovo-Gorodische. In 1614, boyar Ivan Romanov built a castle (ostrog) here, and the village became known as the town of Romanov. In the 18th century, the town was transformed into the village of Romanovo. In 1920, it was renamed Lenino (in honor of Vladimir Lenin).

Lipetsk Airport is an airport in Lipetsk Oblast, Russia located 12 km north of Lipetsk. It is a smaller airfield north of city near Lipetsk Air Base. It handles small airliner traffic. 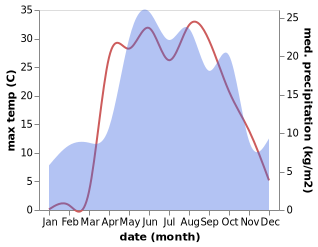