Current time in Stavropol' is now 12:17 AM (Thursday) . The local timezone is named " Europe/Moscow " with a UTC offset of 4 hours. Depending on the availability of means of transportation, these more prominent locations might be interesting for you: Volgograd, Verkhnerusskiy, Tsimlyanskiy, Tatarka, and Mikhaylovsk. Since you are here already, make sure to check out Volgograd . We saw some video on the web . Scroll down to see the most favourite one or select the video collection in the navigation. Where to go and what to see in Stavropol' ? We have collected some references on our attractions page.

Concert taking place in the "House of officers" in a city Stavropol (Russia) It slideshow from photos made at a concert ..

Mikhaylovsk is a town and the administrative center of Shpakovsky District of Stavropol Krai, Russia, located along the Tashla River, 10 kilometers northeast of Stavropol. Population: 70,981; 58,153; 42,993. 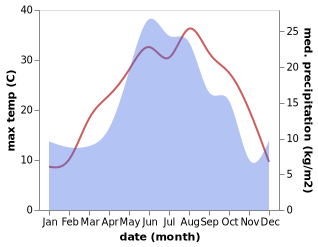