Local time in Urozhaynoye is now 11:27 AM (Tuesday) . The local timezone is named " Europe/Moscow " with a UTC offset of 4 hours. Depending on your flexibility, these larger cities might be interesting for you: Volgograd, Vladimirovka, Vladikavkaz, Stepnoy, and Prokhladnyy. When in this area, you might want to check out Volgograd . Are you looking for some initial hints on what might be interesting in Urozhaynoye ? We have collected some references on our attractions page.

Neftekumsk is a town and the administrative center of Neftekumsky District of Stavropol Krai, Russia, located on the right bank of the Kuma River, 305 kilometers east of Stavropol. Population: 27,687; 27,395; 22,092.

More reading: Wikipedia Article
Located at 44.75 44.98 (Lat./Long.); Less than 6 km away
Tags: Cities and towns built in the Soviet Union, Cities and towns in Stavropol Krai, Populated places established in 1961

The Kuma–Manych Canal is an irrigation canal in Russia's Stavropol Krai. The canal, completed in 1965, runs across the Kuma–Manych Depression, connecting the Kuma River, which flows into the Caspian Sea, with the East Manych River, which also flows toward the Caspian, but dries out long before reaching it. The East Manych River should not be confused with the West Manych, a tributary of the Don which flows into the Sea of Azov and connects to the Black Sea. 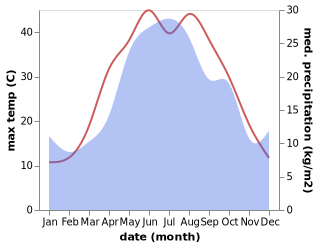