Ruhengeri in the region of Northern Province with its 86,685 habitants is a town located in Rwanda - some 43 mi or ( 69 km ) North-West of Kigali , the country's capital .

Local time in Ruhengeri is now 06:54 PM (Monday) . The local timezone is named " Africa/Kigali " with a UTC offset of 2 hours. Depending on your flexibility, these larger cities might be interesting for you: Tabora, Mwanza, Kigoma, Rwankeri, and Rwamagana. When in this area, you might want to check out Tabora . We found some clip posted online . Scroll down to see the most favourite one or select the video collection in the navigation. Are you looking for some initial hints on what might be interesting in Ruhengeri ? We have collected some references on our attractions page.

Preview of Izzie's blog at TravelPod. Read the full blog here: www.travelpod.com This blog preview was made by TravelPod using the TripAdvisor™ TripWow slideshow creator. Learn more about these videos ..

Preview of Eadamson's blog at TravelPod. Read the full blog here: www.travelpod.com This blog preview was made by TravelPod using the TripAdvisor™ TripWow slideshow creator. Learn more about these vid ..

Ruhengeri Airport is an airport in Rwanda.

Ruhengeri is a city and capital of Musanze District in the Northern Province of Rwanda. Some sources now refer to the city itself as Musanze, after the district in which it lies. It lies near the twin lakes of Lake Burera and Lake Ruhondo and is the gateway city to Volcanoes National Park and the famous Mountain Gorillas in the northwestern part of the country.

Musanze is a district in the Northern Province of Rwanda. Its capital city is Ruhengeri, which is also sometimes known as Musanze.

Volcanoes National Park (French: Parc National des Volcans) lies in northwestern Rwanda and borders Virunga National Park in the Democratic Republic of Congo and Mgahinga Gorilla National Park in Uganda. The national park is known as a haven for the mountain gorilla. It is home to five of the eight volcanoes of the Virunga Mountains, which are covered in rainforest and bamboo. The park was the base for the zoologist Dian Fossey.

The Virunga Mountains are a chain of volcanoes in East Africa, along the northern border of Rwanda, the Democratic Republic of the Congo (DRC) and Uganda. The mountain range is a branch of the Albertine Rift Mountains, which border the western branch of the East African Rift. They are located between Lake Edward and Lake Kivu. The name "Virunga" is an English version of the Kinyarwanda word ibirunga, which means "volcanoes". The mountain range consists of eight major volcanoes. 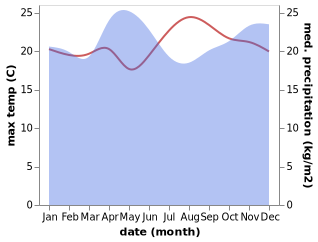