Time in Alicante is now 01:52 PM (Monday) . The local timezone is named " Europe/Madrid " with a UTC offset of 1 hours. Depending on your budget, these more prominent places might be interesting for you: Algiers, Vista Hermosa de la Cruz, Villafranqueza, Valencia, and Torrevieja. Being here already, consider visiting Algiers . We collected some hobby film on the internet . Scroll down to see the most favourite one or select the video collection in the navigation. Check out our recommendations for Alicante ? We have collected some references on our attractions page.

This Leg 6 Documentary tracks the fleet as they leave Itajaí, Brazil and head north on a journey of 4800 nautical miles, hugging the South American coast, thrilling their ways through the Caribbean Is ..

As promised here's the film from our European 'road trip'. We hope you enjoy it! Expect more like this to be uploaded to the Official Volvo Ocean Race YouTube Channel in the future. Get all the latest ..

Back to the Beginning - Volvo Ocean Race

On November 5th, 2011 the fleet left Alicante and start their epic journey around the world. Expect more like this to be uploaded to the Official Volvo Ocean Race YouTube Channel in the future. Get al ..

The annual Hogueras festival in Alicante, Spain, ends with the burning of strange, giant statues all across the city. ..

Gravina Museum of Fine Arts is a museum in the city of Alicante, Spain, located in the Palacio del Conde de Lumiares, a four floor building constructed between 1748 and 1808 and declared a historical monument. The museum is devoted to painting and sculpture of Alicante from the sixteenth century to the early decades of the twentieth century.

Alacantí is a comarca in the Valencian Community, Spain. It is bordered by the comarques of Marina Baixa and Alcoià to the north and Baix Vinalopó to the south.

More reading: Wikipedia Article
Located at 38.35 -0.48 (Lat./Long.); Less than 0 km away
Tags: Alacantí, Comarques of the Valencian Community, Geography of the Province of Alicante

More reading: Wikipedia Article
Located at 38.35 -0.48 (Lat./Long.); Less than 1 km away
Tags: Buildings and structures in Alicante, Castles in the Valencian Community

The Archaeological Museum of Alicante (Spanish: Museo Arqueológico Provincial de Alicante, Valencian: Museu Arqueològic Provincial d'Alacant, abbreviated as MARQ) is an archaeological museum in Alicante, Spain. The museum won the European Museum of the Year Award in 2004, a few years after significant expansion and reallocation to renovated buildings of the antique hospital of San Juan de Dios.

The Port of Alicante is a seaport in Alicante, Spain on the Mediterranean Sea used for commercial and passenger traffic. The port is administered by the Port Authority of Alicante. 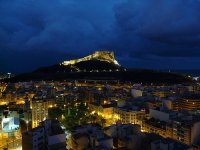 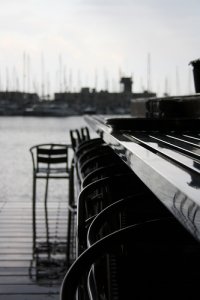