Current time in Murcia is now 09:00 PM (Friday) . The local timezone is named " Europe/Madrid " with a UTC offset of 1 hours. Depending on the availability of means of transportation, these more prominent locations might be interesting for you: Torrevieja, Santomera, Lorqui, Las Torres de Cotillas, and Espinardo. Since you are here already, make sure to check out Torrevieja . We saw some video on the web . Scroll down to see the most favourite one or select the video collection in the navigation. Where to go and what to see in Murcia ? We have collected some references on our attractions page.

The Cathedral Church of Saint Mary in Murcia, commonly called the Cathedral of Murcia, is a church in the city of Murcia, Spain. It is the only cathedral in use in the Roman Catholic Diocese of Cartagena in Spain.

More reading: Wikipedia Article
Located at 37.98 -1.13 (Lat./Long.); Less than 0 km away
Tags: Buildings and structures in Murcia, Cathedrals in Spain, Churches in the Region of Murcia, Conversion of non-Christian places of worship into churches, Former mosques

Plaza de Toros de Murcia is a bullring in Murcia, Spain. It is currently used for bull fighting. The stadium holds 15,000 people. It was built in 1885.

El Puento Nuevo (Spanish for New Bridge) or Puente de Hierro (Spanish for Iron Bridge) is a parabolic metallic bridge spanning the Segura River, completed in 1903 and located in the city of Murcia. As the second bridge built in the city across the river, was called New Bridge to distinguish it from the old bridge (Puente Viejo o Puente de los Peligros), even though today it is the second oldest of the city. 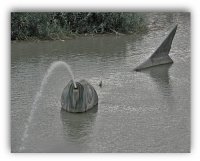 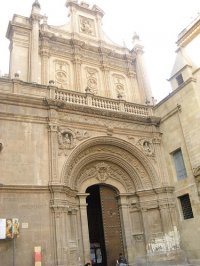