Krathum Baen in the region of Samut Sakhon with its 72,819 inhabitants is a town in Thailand - some 18 mi or ( 28 km ) South-West of Bangkok , the country's capital city .

Current time in Krathum Baen is now 10:30 AM (Monday) . The local timezone is named " Asia/Bangkok " with a UTC offset of 7 hours. Depending on the availability of means of transportation, these more prominent locations might be interesting for you: Phetchaburi, Udon Thani, Samut Songkhram, Samut Sakhon, and Amphoe Mueang Samut Prakan. Since you are here already, make sure to check out Phetchaburi . We encountered some video on the web . Scroll down to see the most favourite one or select the video collection in the navigation. Where to go and what to see in Krathum Baen ? We have collected some references on our attractions page.

On April 30, 2011 I treated myself to a First Class Suite on Emirates Airlines A380 Super Jumbo from Bangkok to Hong Kong. ..

Two big bikes, a CBR 400 and a Triumph motorbike in Bangkok take on the rush-hour in the Thai capital and live to tell the tale! Thailand's traffic doesn't get much worse than this. You saw it here fi ..

The Elephant Theme Show with dramatic sound and narration, a must-see elephant show when visit Bangkok, Thailand. The shows concern elephant and Thai history and how amazing are they. Beside, is the C ..

Samut Sakhon is a town in Thailand, capital of the Samut Sakhon province. It is a stop on the Maeklong Railway.

Samut Sakhon is one of the central provinces (changwat) of Thailand, established by the Act Establishing Changwat Samut Prakan, Changwat Nonthaburi, Changwat Samut Sakhon and Changwat Nakhon Nayok, Buddhist Era 2489 (1946), which came into force as from March 9, 1946. Neighboring provinces are (from the southwest clockwise) Samut Songkhram, Ratchaburi, Nakhon Pathom and Bangkok.

The Thai Human Imagery Museum is a wax museum located in Nakhon Pathom Province, Thailand. Due to the tropical climate of Thailand the figures are made of fibreglass instead of the traditional wax. Exhibits include Thai historical figures, including kings of the Chakri Dynasty, displays of Thai culture and traditions, and famous fictional characters, including those from Sunthorn Phu's epic poem, Phra Abhai Mani.

Phutthamonthon (Thai: พุทธมณฑล, also often called Buddha Monthon) is a Buddhist park in the Phutthamonthon district, Nakhon Pathom Province of Thailand, west of Bangkok. It is highlighted by a 15.87 m (52 ft) high Buddha statue, which is considered to be the highest free-standing Buddha statue of the world. The park was created in 1957 (which was the year 2500 in the Thai Buddhist Era) on the basis of an idea of Thailand's prime minister, Phibunsongkhram. 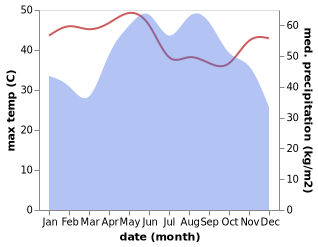