Time in Kairouan is now 03:25 AM (Friday) . The local timezone is named " Africa/Tunis " with a UTC offset of 1 hours. Depending on your travel resources, these more prominent places might be interesting for you: Tripoli, Tunis, Sousse, Sidi Bouzid, and Sfax. Being here already, consider visiting Tripoli . We collected some hobby film on the internet . Scroll down to see the most favourite one or select the video collection in the navigation. Check out our recomendations for Kairouan ? We have collected some references on our attractions page.

Hatem, our badass guide, shows us what's the dilyo ..

The Mosque of Uqba, also known as the Great Mosque of Kairouan (جامع القيروان الأكبر), is one of the most important mosques in Tunisia, situated in the UNESCO World Heritage town of Kairouan.

Kairouan, also known as Kirwan or al-Qayrawan, is the capital of the Kairouan Governorate in Tunisia. Referred to as the Islamic Cultural Capital, it is a UNESCO World Heritage site. The city was founded by the Arabs around 670. In the period of Caliph Mu'awiya (reigned 661-680), it became an important centre for Islamic and Quranic learning, and thus attracting a large number of Muslims from various parts of the world, next only to Mecca and Medina.

Raqada or Raqâda (رقادة) is the site of the second capital of the dynasty of Aghlabids (9th century) located about ten kilometers southwest of Kairouan(also Qairawan; capital of Tunisia). The site now houses the National Museum of Islamic Art.

Hani Airfield is an abandoned World War II military airfield in Tunisia, which was located near Hani, "six miles east of Kairouan" (Al Qayrawan) ; about 125 km south-southwest of Tunis. It was a temporary airfield built by the United States Army Corps of Engineers, used by the United States Army Air Force Ninth Air Force during the Tunisian Campaign. 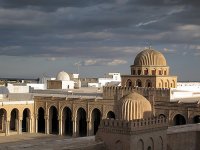 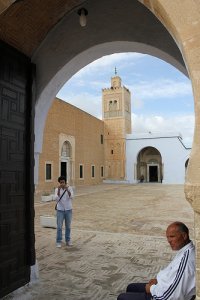 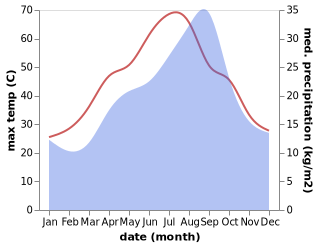