Delve into Adana in Turkey

Local time in Adana is now 10:04 PM (Friday) . The local timezone is named " Europe/Istanbul " with a UTC offset of 2 hours. Depending on your mobility, these larger destinations might be interesting for you: Nicosia, Damascus, Tyre, Beirut, and Tarsus. While being here, you might want to check out Nicosia . We discovered some clip posted online . Scroll down to see the most favourite one or select the video collection in the navigation. Are you curious about the possible sightsseing spots and facts in Adana ? We have collected some references on our attractions page.

Visit to Adana in the south-west of Turkey with the Sabancı Merkez Camıı and the Merkez Park at the bank of the river Seyhan. Director Eric Ross draw up this report. ..

Adana 5 Ocak Stadium (Turkish: Adana 5 Ocak Stadı) is a multi-purpose stadium in Adana, Turkey. The stadium holds 14,085 and was built in 1973. It abides UEFA standards for hosting Europa League games and TFF standards for hosting Super Lig games. The stadium is currently used mostly for football matches, and is the home ground of Adana Demirspor and Adanaspor. National football team of Turkey also played games at this stadium.

Merkez Park (English: Central Park) is a 33-hectare urban park that is located on both banks of the Seyhan River in Adana. The larger portion of the park, 30 hectares, is on the west bank. Merkez Park starts just north of Sabancı Mosque and extends north to Galleria Shopping Mall. On the west of the park there is Fuzuli Street. On the east bank, the park starts north of the Sheraton Hotel (under construction) and extends north to the Acqualand Entertainment Center.

Sabancı Merkez Camii (English: Sabancı Central Mosque) in Adana is the largest mosque in Turkey. The exterior of the mosque is similar to the Sultan Ahmed Mosque (Blue Mosque) in Istanbul while the interior decoration is similar to the Selimiye Mosque in Edirne. Sabanci Central Mosque, which went into service in 1998, is built on a total of 52,600 square meter of land and has a closed area of 6,600 square meters. . The Mosque was constructed upon a confiscated Armenian cemetery.

Tepebağ (English: Orchard Hill) is a historical neighborhood in the old town of Adana. It is situated on a hill overlooking the Seyhan River on the west, steps away from the Taşköprü, and reflects the traditional housing architecture of the city. Tumulus at Tepebağ is the area of the first settlements in Adana.

The Seyhan River is the longest river in Turkey that is flowing into Mediterranean Sea. The river is 560 km and flows southwest from its headwaters in the Tahtalı-Mountains in Anti-Taurus Mountains to the Mediterranean Sea via a broad delta. Its main tributaries are Zamantı and Göksu which unite in Aladağ, Adana to form Seyhan River. Zamantı River originates from Uzun Plateau in Pınarbaşı, Kayseri and crosses Tomarza, Develi and Yahyalı districts of Kayseri. 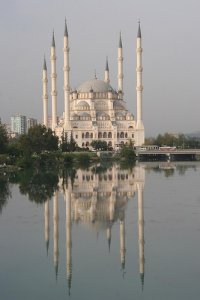 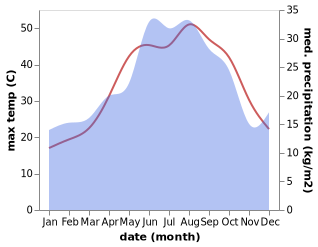