Local time in Odessa is now 04:16 AM (Wednesday) . The local timezone is named " Europe/Kiev " with a UTC offset of 2 hours. Depending on your flexibility, these larger cities might be interesting for you: Tiraspol, Stefan Voda, Chişinău, Tighina, and Iaşi. When in this area, you might want to check out Tiraspol . We found some clip posted online . Scroll down to see the most favourite one or select the video collection in the navigation. Are you looking for some initial hints on what might be interesting in Odessa ? We have collected some references on our attractions page.

Travel Ukraine: ow.ly You can meet hundreds of beautiful, single, Ukrainian girls and Russian Girls.... meet the woman of your dreams! Visit the site to learn how to get started. ..

Odessa Ukraine Tours: ow.ly Highlights from our 2010 tour to Odessa, Ukraine. Meet beautiful women in Ukraine while experiencing a vacation un-like any other. Learn how by visiting the site above. ..

This was made while I was in Odessa in the spring of 09, with my friends Joel and Sofia Gabrielsson. I wrote this song as a joke about half a year before, one dreary day at my desk job, for Rachel, a ..

Odessa's Philharmonic Theatre is a theater in Odessa, Ukraine. The design resembles the Doge's Palace in Venice.

Deribasovskaya or Derybasivska Street is a pedestrian walkway in the heart of Odessa, Ukraine. The street is named after Josep de Ribas, who helped build the city, who was its first mayor and who lived on the street. Next to the street is Odessa's first park, which was built shortly after the foundation of the city in 1803 by the De Ribas brothers, Joseph and Felix (Josep and Fèlix).

The famous Privoz market, located at 14 Privoz Street, is the largest food market in Odessa, Ukraine. Privoz began in 1827, when wares were sold from the back of horse driven carts. Privoz adjoined the Stary (old) bazaar (also called the Volny market) the first bazaar in Odessa. Gradually more buildings were constructed as the city grew. In the 1940s zoo animals were moved from the Odessa zoo to Simferopol. Four year old elephant Murza (Мурза) escaped.

Bristol Hotel is a hotel in Odessa, Ukraine. Built between 1898 and 1899 to designs by Alexander Bernadazzi and Adolf Minkus, it is located in the center of the city, on Pushkinskaya Street, across the street from the Odessa Philharmonic Theater. The hotel is a combined renaissance and baroque style. The building has Baroque classical statues and marble white columns facing the boulevard. The hotel has 113 rooms and is one of the notable landmarks of the city.

Odessa, or Odesa, is the third largest city in Ukraine, with a population of 1,003,705. The city is a major seaport located on the northwestern shore of the Black Sea and the administrative center of the Odessa Oblast. The predecessor of Odessa, a small Tatar settlement, was founded by Hacı I Giray, the Khan of Crimea, in 1440 and originally named after him as "Hacıbey". 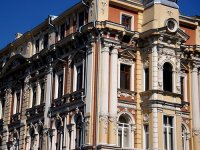 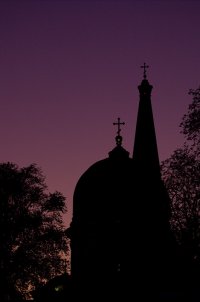 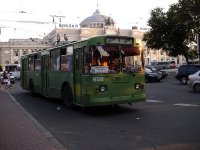 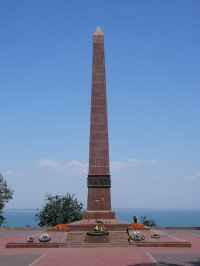 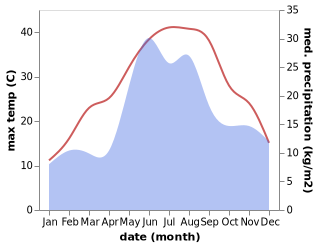