Local time in Varna is now 01:04 AM (Monday) . The local timezone is named " Europe/Sofia " with a UTC offset of 2 hours. Depending on your flexibility, these larger cities might be interesting for you: Chişinău, Ovidiu, Iaşi, Constanţa, and Bucharest. When in this area, you might want to check out Chişinău . We found some clip posted online . Scroll down to see the most favourite one or select the video collection in the navigation. Are you looking for some initial hints on what might be interesting in Varna ? We have collected some references on our attractions page.

Blair is a MS patient from Saskatchewan, Canada. He had his CCSVI diagnostics and liberation treatment done at Medical centre CCSVI BG - VARNA, Bulgaria. Blair speaks of his experience and trip to Var ..

Saint Nicholai's icon (Holy image) labels the light house at the tip of the outskirt pier of the Port of Varna. Saint Nicholai is patron saint of sailors, fishermen, ships and sailing. In centuries of Greek folklore, Nicholas was seen as "The Lord of the Sea", often described by modern Greek scholars as a kind of Christianised version of Poseidon (after the advent of Christianity).

Varna is the largest city and seaside resort on the Bulgarian Black Sea Coast, classified the third and the second largest city in Bulgaria. It is the administrative centre of the homonymous province and Varna Municipality and the eleventh-largest city in the Balkans after Istanbul, Athens, Bucharest, Belgrade, Sofia, Thessaloniki, Zagreb, Skopje, Tirana and Plovdiv.

Stadion Spartak is a multi-purpose stadium in Varna, Bulgaria. It is currently used mostly for football games and is the home ground of PFC Spartak Varna. The stadium is built in 1962 and opened in 1964,the capacity is 13,000 people. The stadium also includes a fan bar-cafe and modern small football fields. It is located not far from the center of the city. Some people are using the nickname of the stadium "Koritoto".

The Varna Archaeological Museum (Bulgarian: Варненски археологически музей, Varnenski arheologicheski muzey) is an archaeological museum in the city of Varna on the Black Sea coast of Bulgaria. Founded on 3 June 1888, when a museum, part of the City Library was established, the Varna Archaeological Museum is situated in a historic building designed in the Neo-Renaissance style by the noted architect Petko Momchilov and built in 1892–1898 for the Varna Girls' School.

Ticha Stadium is a multi-purpose stadium in Varna, Bulgaria. It is located in the north-eastern part of the city. Currently the stadium is used mostly for football matches and is the home ground of Cherno More Varna. It has a seating capacity of 12,500 spectators. The stadium's name comes from the former name of the club and the river Kamchia. 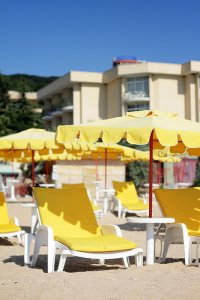 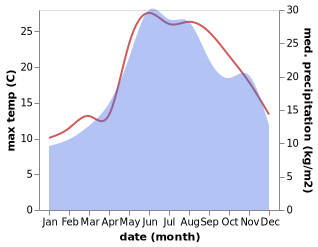