Tashkent in the region of Toshkent Shahri with its 1,978,028 citizens is a city located in Uzbekistan and is the capital of this country.

Time in Tashkent is now 12:38 AM (Monday) . The local timezone is named " Asia/Tashkent " with a UTC offset of 5 hours. Depending on your travel resources, these more prominent places might be interesting for you: Samarkand, Dushanbe, Zangiata, Urtaowul, and Tashkent. Being here already, consider visiting Samarkand . We collected some hobby film on the internet . Scroll down to see the most favourite one or select the video collection in the navigation. Check out our recomendations for Tashkent ? We have collected some references on our attractions page.

The Powerful Foods of Uzbekistan

Here I will show some of the 'powerful foods' (in the words of our guide) of Uzbekistan. Foods to make us strong, sturdy and hale and hearty like the Uzbeks. Foods which could help us have many childr ..

The Tashkent tramway network forms part of the public transport system in Tashkent, the capital city of Uzbekistan. Opened in 1901, the network currently has six lines.

Bunyodkor Stadium is a multi-purpose stadium in Tashkent, Uzbekistan. It is currently used mostly for football matches and is the home ground of FC Bunyodkor. The stadium holds 34,000 people and was opened in September 2012. Its original shape was designed by GMP Architekten, Germany. It was planned to use the new arena for some matches of the 2012 FIFA U-20 Women's World Cup. The stadium was built on the site of Bunyodkor's former home ground, MHSK Stadium and replaces the JAR Stadium.

Milliy Bog is a station of the Tashkent Metro on Chilonzor Line which was opened on 6 November 1977.

Tashkent International Airport is the main international airport of Uzbekistan and the largest airport in Central Asia. It is located 12 km from the center of Tashkent.

More reading: Wikipedia Article
Located at 41.26 69.28 (Lat./Long.); Less than 5 km away
Tags: Airports built in the Soviet Union, Airports in Uzbekistan, Buildings and structures in Tashkent, Transport in Tashkent

Bunyodkor is a station of the Tashkent Metro on Chilonzor Line which was opened on 6 November 1977. 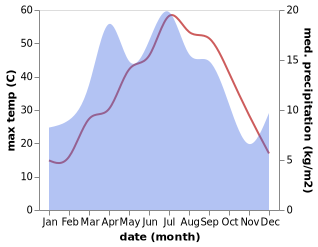