Current time in Samarkand is now 08:50 AM (Tuesday) . The local timezone is named " Asia/Samarkand " with a UTC offset of 5 hours. Depending on the availability of means of transportation, these more prominent locations might be interesting for you: Zaaglyk, Topakul, Toyloq, Qarshi, and Navakhchinan. Since you are here already, make sure to check out Zaaglyk . We encountered some video on the web . Scroll down to see the most favourite one or select the video collection in the navigation. Where to go and what to see in Samarkand ? We have collected some references on our attractions page.

The silk road city of Samarkand

Visiting the Registan during the day is far better than visiting it at night! Just remember to try to haggle on the ticket in, they usually knock off 30-40% right off the bat. ..

Uzbek mommies rapping on the dance floor in Samarkand, Uzbekistan

The Gūr-e Amīr or Guri Amir is a mausoleum of the Asian conqueror Tamerlane (also known as Timur) in Samarkand, Uzbekistan. It occupies an important place in the history of Turko-Persian Architecture as the precursor and model for later great Mughal architecture tombs, including Humayun's Tomb in Delhi and the Taj Mahal in Agra, built by Timur's descendants, the ruling Mughal dynasty of North India. It has been heavily restored.

The Registan was the heart of the ancient city of Samarkand of the Timurid dynasty, now in Uzbekistan. The name Registan (ریگستان) means "Sandy place" in Persian.

Bibi-Khanym Mosque is a famous historical Friday mosque in Samarkand, Uzbekistan, whose name comes from the wife of 14th-century ruler, Amir Timur.

Dynamo Samarkand Stadium is a multi-use stadium in Samarkand, Uzbekistan. It is currently used mostly for football matches and is the home stadium of Dynamo Samarkand. The stadium holds 12,500 people.

Shah-i-Zinda is a necropolis in the north-eastern part of Samarkand, Uzbekistan. 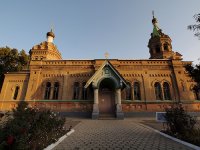 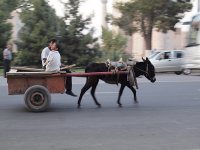 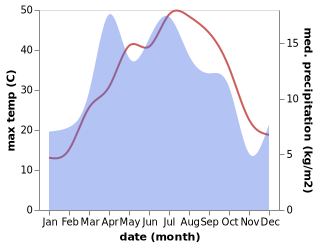