Time in Turkmenabat is now 07:14 PM (Tuesday) . The local timezone is named " Asia/Ashgabat " with a UTC offset of 5 hours. Depending on your travel resources, these more prominent places might be interesting for you: Mashhad, Nukus, Mazari Sharif, Balkh, and Mug'lon Shahar. Being here already, consider visiting Mashhad . Check out our recommendations for Turkmenabat ? We have collected some references on our attractions page.

Türkmenabat, formerly and since medieval times, Chardzhou, also spelled Çärjew, Chardjui, Charjou, Chardzhev, Charjev, Chärjew, or Charjew (Persian for 'four canals'), ancient Amul, is a city in Turkmenistan, capital of Lebap Province. As of 2009, it had a population of approximately 254,000 people (up from 161,000 in the 1989 census). The name Chardjui is Persian (چهارجوی) and means "four streams".

Turkmenabat Airport is an airport in Chardzhev, Turkmenistan. It is located approximately 5 miles east of the center of Chardzhev. The airport offers four daily nonstop flights to Ashgabat.

Türkmenabat Stadium is a stadium in Türkmenabat, Turkmenistan. It is currently used mostly for football matches and serves as the home for FC Bagtyýarlyk. It has a capacity of 10,000 people.

Farap is a town and capital of Farap District in the Lebap Province of Turkmenistan.

Sakar, Turkmenistan is a town and capital of Sakar District in the Lebap Province of Turkmenistan. 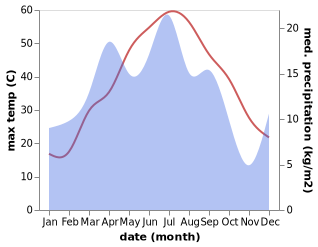