Time in Mary is now 08:49 PM (Thursday) . The local timezone is named " Asia/Ashgabat " with a UTC offset of 5 hours. Depending on your budget, these more prominent locations might be interesting for you: Mashhad, Ashkhabad, Herat, Bukhara, and Vos'moye Marta. Since you are here already, consider visiting Mashhad . We saw some hobby film on the internet . Scroll down to see the most favourite one or select the video collection in the navigation. Where to go and what to see in Mary ? We have collected some references on our attractions page.

Preview of Schwate's blog at TravelPod. Read the full blog here: www.travelpod.com This blog preview was made by TravelPod using the TripAdvisor™ TripWow slideshow creator. Entry from: Mary, Turkmenis ..

Mary is the capital city of Mary Province in Turkmenistan. Former names include Merv, Meru and Margiana. It is located at {{#invoke:Coordinates|coord}}{{#coordinates:37|36|N|61|50|E|region:TM_type:city|| |primary |name= }}. The city is an oasis in the Karakum Desert, located on the Murghab river. In 2009, Mary had a population of 123,000, up from 92,000 in the 1989 census. In Kerait tradition, Mary the mother of Jesus was buried here. The city also has an airport.

Mary Stadium is a stadium in Mary, Turkmenistan. It is currently used mostly for football matches and serves as the home for Merw Mary. It has a capacity of 10,000 people.

Sanjan is an ancient city on the southern edge of the Kara-kum Desert, in the vicinity of the historically eminent oasis-city of Merv. Topographically, Sanjan is located in the Greater Khorasan region of Central Asia. Politically, Sanjan is in the present-day Mary Province of Turkmenistan. Together with Merv, Sanjan was an important stopping place and center of trade on the southern route of the Silk road. 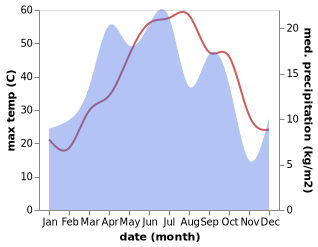