Current time in Mashhad is now 10:31 PM (Wednesday) . The local timezone is named " Asia/Tehran " with a UTC offset of 3.5 hours. Depending on the availability of means of transportation, these more prominent locations might be interesting for you: Dastgerdan, Shotorak, Pava, Karimabad, and Konar Kal. Since you are here already, make sure to check out Dastgerdan . We encountered some video on the web . Scroll down to see the most favourite one or select the video collection in the navigation. Where to go and what to see in Mashhad ? We have collected some references on our attractions page.

Goharshad Mosque is a former free standing mosque in Mashhad of the Razavi Khorasan Province, Iran, which now serves as one of the prayer halls within the Imam Reza shrine complex. It was built by the order of Queen Goharshad, the wife of Shah Rukh of the Timurid Dynasty in 1418 CE. The architect of the edifice was Ghavameddin Shirazi, who is responsible for so many of Shah Rukh's great buildings, with the architectural and decorative manpower supplied from Shiraz and Isfahan.

Muhammad bin al-Ḥassan b. Ali b. al-Ḥusayn al-ʿĀmili al-Mashghari, commonly known as Al-Ḥurr Al-ʿĀmili (1033/1624 - 1104/1693), was a muhaddith and a prominent Twelver Shi’a scholar. He is best known for his comprehensive hadith compilation known as Wasael ush-Shia (also known as Wasa’il ush-Shi’a) and as the second of the “Three Great Muhammads” in later Shi’a Islamic history.

Mashhad International Airport or Shahid Hashemi Nejad Airport is an airport in Mashhad, Razavi Khorasan, Iran. The airport is the country's second busiest only to Tehran Mehrabad Airport and above the famous Tehran's Imam Khomeini International Airport. In 2010 the airport handled 5,983,227 passengers along with 56,533 tons of cargo. It is connected to 57 destinations and has frequent flights to 30 cities within Iran and 27 destinations in the Central Asia, the Middle East and East Asia.

More reading: Wikipedia Article
Located at 36.24 59.64 (Lat./Long.); Less than 8 km away
Tags: Airports in Iran, Buildings and structures in Mashhad

Taban Air Flight 6437 was a scheduled domestic flight that crashed on landing at Mashhad, Iran on 24 January 2010. All 170 people escaped from the burning aircraft without loss of life. Most of the passengers were pilgrims returning from visiting holy sites in Iraq. 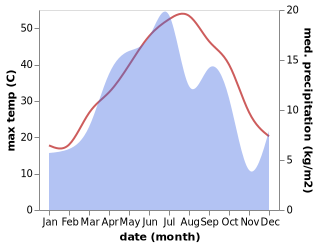