Delve into Ashkhabad in Turkmenistan

Ashkhabad in the region of Ahal with its 727,700 residents is located in Turkmenistan and is the capital of this country.

Local time in Ashkhabad is now 10:17 PM (Monday) . The local timezone is named " Asia/Ashgabat " with a UTC offset of 5 hours. Depending on your mobility, these larger destinations might be interesting for you: Mashhad, Gorgan, Bojnourd, Yerrikkala, and Pervomayskiy. While being here, you might want to check out Mashhad . We discovered some clip posted online . Scroll down to see the most favourite one or select the video collection in the navigation. Are you curious about the possible sightsseing spots and facts in Ashkhabad ? We have collected some references on our attractions page.

My first slide show movie about my beautiful city Ashgabat, Turkmenistan. I hope you'll like it! :-) ..

Köpetdag Stadium is a multi-purpose stadium in Ashgabat, Turkmenistan. It is currently used mostly for football matches and serves as the home for Köpetdag Aşgabat and Talyp Sporty Aşgabat. The stadium holds 26,000 people and was built in 1997.

The Neutrality Arch was a monument located in Ashgabat, Turkmenistan. The three-legged arch, which became known locally as "The Tripod", was 75 metres tall and was built in 1998 on the orders of Turkmenistan's President Saparmurat Niyazov to commemorate the country's official position of neutrality. It cost $12 million to construct. The monument was topped by a 12-metre tall gold-plated statue of Niyazov which rotated to always face the sun.

Türkmenbaşy Palace is a palace in the capital city of Asgabat in Turkmenistan. It has been the presidential headquarters and home of the president of Turkmenistan for many years. President Saparmurat Niyazov, who styled himself Türkmenbaşy, and for whom it is named, lived in the palace between 1997 and his death in 2006.

Rukhiyet Palace is a palace in the capital city of Asgabat in Turkmenistan.

More reading: Wikipedia Article
Located at 37.93 58.39 (Lat./Long.); Less than 2 km away
Tags: Buildings and structures in Ashgabat, Universities in Turkmenistan 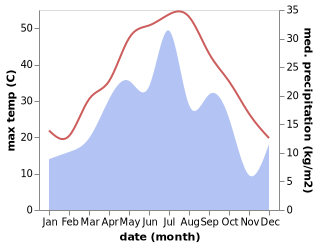