Local time in Bukhara is now 01:55 PM (Saturday) . The local timezone is named " Asia/Samarkand " with a UTC offset of 5 hours. Depending on your mobility, these larger cities might be interesting for you: Mazari Sharif, Balkh, Zagarakyash, Yukarykobdun, and Uzbekon. When in this area, you might want to check out Mazari Sharif . We discovered some clip posted online . Scroll down to see the most favourite one or select the video collection in the navigation. Are you looking for some initial hints on what might be interesting in Bukhara ? We have collected some references on our attractions page.

Preview of Jimsim's blog at TravelPod. Read the full blog here: www.travelpod.com This blog preview was made by TravelPod using the TripAdvisor™ TripWow slideshow creator. Learn more about these video ..

Lyab-i Hauz, or Lyab-i Khauz, is the name of the area surrounding one of the few remaining hauz (ponds) that have survived in the city of Bukhara. Until the Soviet period there were many such ponds, which were the city's principal source of water, but they were notorious for spreading disease and were mostly filled in during the 1920s and 1930s.

Bukhara, from the Soghdian βuxārak ("lucky place"), is the capital of the Bukhara Province of Uzbekistan. The nation's fifth-largest city, it has a population of 263,400 (2009 census estimate). The region around Bukhara has been inhabited for at least five millennia, and the city has existed for half that time. Located on the Silk Road, the city has long been a center of trade, scholarship, culture, and religion.

The title Po-i-Kalyan (also Poi Kalyan), which means "The foot of the Great", belongs to the architectural complex located at the foot of the great Kalyan minaret in Bukhara, Uzbekistan.

The Ark is a massive fortress located in the city of Bukhara, Uzbekistan that was initially built and occupied around the 5th century AD. In addition to being a military structure, the Ark encompassed what was essentially a town that, during much of the fortress' history, was inhabited by the various royal courts that held sway over the region surrounding Bukhara. The Ark was used as a fortress until it fell to Russia in 1920. 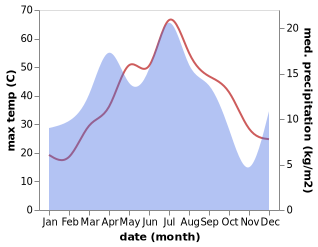