Delve into Osh in Kyrgyzstan

Current time in Osh is now 05:29 PM (Thursday) . The local timezone is named " Asia/Bishkek " with a UTC offset of 6 hours. Depending on your travel modalities, these larger destinations might be interesting for you: Kunduz, Bel'-Kyshtak, Tashkent, Namangan, and Fergana. While being here, make sure to check out Kunduz . We encountered some video on the web . Scroll down to see the most favourite one or select the video collection in the navigation. Are you curious about the possible sightsseing spots and facts in Osh ? We have collected some references on our attractions page.

Kyrgyzstan.After riots in the city of Osh

So now looks like the city of Osh. People fled to Uzbekistan. The Osh in fire. ..

Suyumbayev Stadion is a multi-use stadium in Osh, Kyrgyzstan. It is currently used mostly for football matches and serves as the home stadium for Alay Osh and Ak-Bura Osh of the Kyrgyzstan League. The stadium has a capacity of 12,000 people.

Osh is the second largest city in Kyrgyzstan, located in the Fergana Valley in the south of the country and often referred to as the "capital of the south". The city is at least 3,000 years old, and has served as the administrative center of Osh Province since 1939. The city has an ethnically mixed population of about 220,000 (in 2003), comprising Kyrgyz, Uzbeks, Russians, Tajiks, and other smaller ethnic groups.

The Sulayman Mountain (also known as Taht-I-Suleiman, Sulayman Rock or Sulayman Throne) is the only World Heritage Site in the country of Kyrgyzstan. http://whc. unesco. org/en/news/528 It is located in the city of Osh and was once a major place of Muslim and pre-Muslim pilgrimage. The rock rises abruptly from the surrounding plains of the Fergana Valley and is a popular place among locals and visitors, with a splendid view.

Osh International Airport (Kyrgyz: Ош эл аралык аэропорту, Russian: Международный аэропорт "Ош" is an airport serving Osh, a city in the Osh province of Kyrgyzstan. International arrivals with questions concerning their entry into the country may call the border service's Southern Regional Administration at 7-25-25; 2-34-6 or border unit #2011 at 5-55-09; 3-89-38.

Akbuura Game Reserve is a reserve in Osh Province of Kyrgyzstan. It was established in 1975 with a purpose of conservation breeding areas of pheasant, see-see partridge, and chuckar. The reserve covers 10,000 hectares. 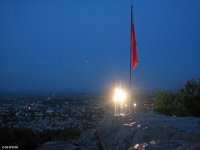 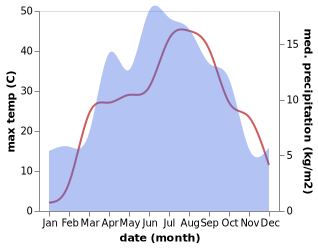