Bishkek in the region of Bishkek with its 900,000 inhabitants is a town in Kyrgyzstan and is the capital of this country.

Current time in Bishkek is now 02:24 PM (Sunday) . The local timezone is named " Asia/Bishkek " with a UTC offset of 6 hours. Depending on the availability of means of transportation, these more prominent locations might be interesting for you: Fergana, Andijan, Taraz, Taldykorgan, and Lugovoye. Since you are here already, make sure to check out Fergana . We encountered some video on the web . Scroll down to see the most favourite one or select the video collection in the navigation. Where to go and what to see in Bishkek ? We have collected some references on our attractions page.

Bazaar in Bishkek, Kyrgyzstan, driving away.

Outside a Bazaar in Bishkek, Kyrgyzstan. ..

Talant Sultanov shows us some local Kyrgyz music back in 1995. ..

The White House is the presidential office building in Bishkek, Kyrgyzstan. The White House was the site of riots during both the 2005 Tulip Revolution and the 2010 Kyrgyzstani riots. During the 2010 riots a fire broke out and damaged portions of the building and destroyed the hard copies of many government records.

Kyrgyz Academy of Sciences (official name National Academy of Sciences of the Republic of Kyrgyzstan), originally part of the Soviet Academy of Sciences, was established as an independent entity by government decree in December 1993. The aims of the Academy are to carry out research in natural, engineering, and social sciences, to train scientists in all fields of knowledge, to advise the government in matters of scientific policy, and to disseminate knowledge.

Ala-Too Square is the central square in Bishkek, Kyrgyzstan. The square was built in 1984 to celebrate the 60th anniversary of the Kyrgyz SSR, at which time a massive statue of Lenin was placed in the square's center. The statue of Lenin was moved in 2003 to a smaller square in the city, and a new statue called Erkindik (Freedom) was installed in its place. The square serves as a place for state events and celebrations. 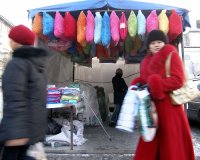 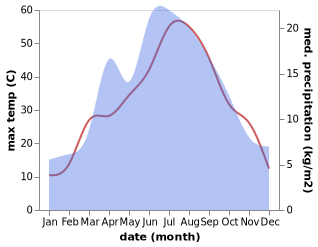