Delve into Kant in Kyrgyzstan

Local time in Kant is now 04:29 PM (Sunday) . The local timezone is named " Asia/Bishkek " with a UTC offset of 6 hours. Depending on your mobility, these larger destinations might be interesting for you: Fergana, Andijan, Taraz, Taldykorgan, and Moldovanovka. While being here, you might want to check out Fergana . Are you curious about the possible sightsseing spots and facts in Kant ? We have collected some references on our attractions page.

Kant is a town in the Chuy Valley of northern Kyrgyzstan, some 20 kilometres east of Bishkek. It is the administrative center of the Ysyk-Ata District (formerly Kant District). Kant was established in 1928. The Kyrgyz word for sugar is "kant", and the city received its name when a sugar plant was built there in the 1930s. (It is an often repeated myth that the town was named after the German philosopher Immanuel Kant). Kant is an industrial and service center.

Ysyk-Ata District is one of the eight districts of Chuy Province in the northern Kyrgyzstan. The administrative center of the district is the city of Kant, and the district itself was known as Kant District in the past. The district is located on the southern side of the Chui River, about halfway between the national capital Bishkek and the former provincial capital Tokmok.

Stadion Sportkompleks Abdysh-Ata is a multi-use stadium in Kant, Kyrgyzstan. It is currently used mostly for football matches and serves as the home stadium for Abdish-Ata Kant of the Kyrgyzstan League. The stadium has a capacity of 3,000 people.

Kant Air Base (Russian: Авиабаза Кант Aviabaza Kant) is a military air base in Ysyk-Ata District of Chuy Oblast in Kyrgyzstan. It is located just south of the city of Kant, some 20 km east of downtown Bishkek.

Bergtal, also sometimes spelt Bergthal and renamed Rotfront in 1927, is a settlement 60 kilometers east of Bishkek in the Chuy Province of Kyrgyzstan, near the border of Kazakhstan. Originally settled by Germans, a significant minority remains. 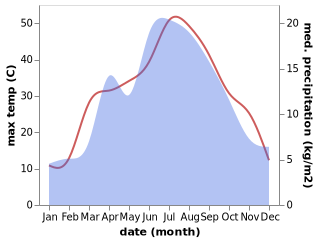