Local time in Sevan is now 04:38 AM (Tuesday) . The local timezone is named " Asia/Yerevan " with a UTC offset of 4 hours. Depending on your flexibility, these larger cities might be interesting for you: Tabriz, Erzurum, Doğubeyazıt, Makhachkala, and Grozny. When in this area, you might want to check out Tabriz . We found some clip posted online . Scroll down to see the most favourite one or select the video collection in the navigation. Are you looking for some initial hints on what might be interesting in Sevan ? We have collected some references on our attractions page.

Around the Sevan lake (Arménie/Armenia)

Sevanavank (meaning monastery of Sevan) is a monastery located on the northwestern shore of Lake Sevan in the eastern Armenian province of Geghark'unik', not far from the town of Sevan. According to a ..

The noise of this ice was so loud i heard it from far away and came to investigate. After about ten minutes it suddenly stopped filling the air with silence ..

This is my lake! Of all places in the world to serve in the Peace Corps, I feel like I got a good one. It's still too cold and windy to go swimming in early May but it's a nice walk down to the shore ..

Sevan (Armenian: Սեվան; until 1935, Elenovka or Yelenovka Russian: Еленовка) is a city, urban community and a popular resort in Armenia, located in the Gegharkunik Province, lying on the northern shores of Lake Sevan. The city is biult on a height of over 1900 meters above sea level, 66 kilometers north-east of the capital Yerevan, and 40 kilometers north of Gavar, the administrative centre of Gegharkunik province. It was founded as Yelenovka in 1842 to become a Russian-populated village.

Gomadzor is a town in the Gegharkunik Province of Armenia.

Varser (Armenian: Վարսեր; until 1946, Chirchir and Chrchr) is a town in the Gegharkunik Province of Armenia. The town is first mentioned in the 9th century, and was a gift of Ashot II.

Lchashen is a town in the Gegharkunik Province of Armenia. The settlement dates back more than 5000 years. The town has a 13th century church, a Urartian Iron Age fort, and a Bronze Age cemetery.

Tsamakaberd is a town in the Gegharkunik Province of Armenia. It is located just east of Sevan, and contains a cyclopean fortress. 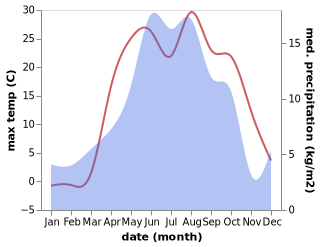