Akhuryan in the region of Shirak with its 7,672 citizens is a city located in Armenia - some 52 mi or ( 84 km ) North-West of Yerevan , the country's capital city .

Time in Akhuryan is now 03:49 AM (Wednesday) . The local timezone is named " Asia/Yerevan " with a UTC offset of 4 hours. Depending on your travel resources, these more prominent places might be interesting for you: Tabriz, Erzurum, Doğubeyazıt, Diyarbakır, and Grozny. Being here already, consider visiting Tabriz . We collected some hobby film on the internet . Scroll down to see the most favourite one or select the video collection in the navigation. Check out our recomendations for Akhuryan ? We have collected some references on our attractions page.

Qanat is a type of underground irrigation canal between an aquifer on the piedmont to a garden/village or city on an arid plain. Qanat is one of the most sophisticated traditional irrigation system. E ..

Gyumri is the second largest city in Armenia and the capital of the Shirak Province in the northwestern part of the country. It is located around 126 km north of the capital Yerevan. As of the 2009 official estimate, the city had a population of 146,400, down from 150,917 reported at the 2001 official census. The name of the city has been changed several times throughout the history.

Gyumri City Stadium is an all-seater football stadium in Gyumri, Armenia. It is currently the home venue of the Armenian Premier League club Shirak F.C. of Gyumri. The capacity of the stadium is 2,761 seats, excluding the standing section in the southern tribune.

The Russian 102nd Military Base (Russian: 102-я Российская военная база; Armenian: Ռուսական 102-րդ Ռազմական Կայան) is a Russian military base in Gyumri, Armenia, part of the Transcaucasian Group of Forces. It was formerly the Soviet Army's 127th Motor Rifle Division of the Soviet Seventh Guards Army. The base is about 120 kilometers north of the Armenian capital, Yerevan. 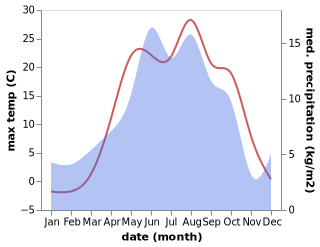