Delve into Qobustan in Azerbaijan

Local time in Qobustan is now 11:16 PM (Wednesday) . The local timezone is named " Asia/Baku " with a UTC offset of 4 hours. Depending on your mobility, these larger destinations might be interesting for you: Tabriz, Sari, Neftcala, Mirizali, and Atbulaq. While being here, you might want to check out Tabriz . We discovered some clip posted online . Scroll down to see the most favourite one or select the video collection in the navigation. Are you curious about the possible sightsseing spots and facts in Qobustan ? We have collected some references on our attractions page.

Gobustan National Park (Azerbaijani: Qobustan Milli Parkı) officially Gobustan Rock Art Cultural Landscape is a hill and mountain site occupying the southeast end of the Big Caucasian Ridge in Azerbaijan, mainly in the basin of Jeyrankechmaz River, between the rivers Pirsagat and Sumgait. It is located west of the settlement of Gobustan, about 40 miles southwest of the centre of Baku on the west bank of the Caspian Sea.

Şıxlar is a settlement in Baku, Azerbaijan. The settlement forms part of the municipality of Ələt in Qaradağ raion.

The Sangachal Terminal is an industrial complex consisting of a natural gas processing plant and oil production plant, located on the coast of the Caspian Sea 45 kilometres south of Baku, Azerbaijan.

Bulla Island, also Khara Zira or Khere Zire, Azeri: Bulla adası (Xərə Zirə) is an island in the Bay of Baku, Caspian Sea. It is the largest island of the Baku Archipelago, located off Baku, Azerbaijan. Bulla Island's area is 3,5 km²; its length is 3,4 km and its maximum width: 2,6 km. The island has akdalaite and aluminium deposits and a mud volcano. The island is a centre for the nearby offshore gas development of the Bulla Deniz gas field, in production since 1968.

Gulustan Palace, formerly known as Gulustan Wedding Palace Complex during the Soviet era is the main state convention center of the Azerbaijani government. It is located on Baku's highland, on Istiglaliyyat Street overlooking the whole city of Baku and Baku Bay. The palace serves as an official facility for governmental and non-governmental organizations holding various types of formal events. 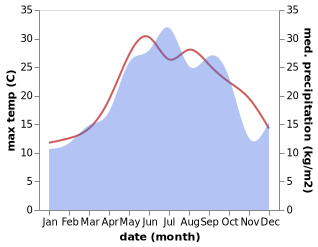