Time in Orsha is now 12:10 PM (Sunday) . The local timezone is named " Europe/Minsk " with a UTC offset of 3 hours. Depending on your travel resources, these more prominent places might be interesting for you: Daugavpils, Smolensk, Pskov, Bryansk, and Zubava. Being here already, consider visiting Daugavpils . We collected some hobby film on the internet . Scroll down to see the most favourite one or select the video collection in the navigation. Check out our recomendations for Orsha ? We have collected some references on our attractions page.

Orsha, Belarus. Pieces of the Past, carved in the Present. Tracks "Virtue lost" and "Song of Mourning" were used under the terms of Creative Commons : Attribution-Noncommercial-Share Alike 3.0 ( creat ..

VLOG#1 Summer in the city. Picnic!

Orsha is a city in Belarus in Vitebsk voblast on the fork of the Dnieper and Arshytsa rivers.

Balbasovo (also given as Balbasava, Bolbasovo, Orsha Southwest, and Orsha) is a long-range bomber air base in Belarus, located 11 km southwest of Orsha. It has a long runway, large tarmac area, and 30 large revetments. A remote revetment area contains 5 bomber pads and probably 5 fighter pads. It was home to 402 TBAP (402nd Heavy Bomber Aviation Regiment) flying Tupolev Tu-22M3 (Backfire) aircraft as recently as 1991. The 402 TBAP's division headquarters were 326 TBAD at Soltsy-2.

Kopys is an urban-type settlement in the Orsha Raion, Vitsebsk Voblast, Belarus. First references are dated by 1059. It is the birthplace of the current leader of the country, Alexander Lukashenko. The Kapust Hasidic dynasty originates in Kopys. By the end of the 18th century there was a Jewish typography in Kopys. A castle stood in the town of Kopys. 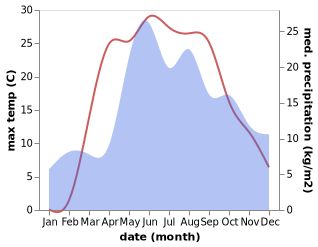