Current time in Haradok is now 05:19 PM (Tuesday) . The local timezone is named " Europe/Minsk " with a UTC offset of 3 hours. Depending on the availability of means of transportation, these more prominent locations might be interesting for you: Daugavpils, Smolensk, Pskov, Veliky Novgorod, and Zaronovo. Since you are here already, make sure to check out Daugavpils . Where to go and what to see in Haradok ? We have collected some references on our attractions page.

Haradok is a town in Vitebsk Province in Belarus with the population of 34,700 people. Approximately 14,000 people reside in the town itself around 30,000 people reside within the district. Haradok district is one of the largest in the country. The town is located on the north-east of Belarus and occupies around 3,000 square kilometers. It is situated 30 kilometers away from Vitebsk, the major city of one of the six provinces in the Republic of Belarus. 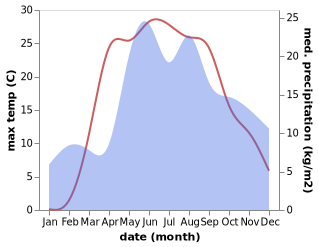