Time in Sorocaba is now 02:52 PM (Monday) . The local timezone is named " America/Sao Paulo " with a UTC offset of -2 hours. Depending on your travel resources, these more prominent places might be interesting for you: Taboao da Serra, Sumare, São Paulo, Santos, and Salto de Pirapora. Being here already, consider visiting Taboao da Serra . We collected some hobby film on the internet . Scroll down to see the most favourite one or select the video collection in the navigation. Check out our recommendations for Sorocaba ? We have collected some references on our attractions page.

The Microregion of Sorocaba (Portuguese: Microrregião de Sorocaba) is a microregion in the central part of São Paulo State, Brazil.

TheSorocaba Metropolitan Cathedral or Metropolitan Cathedral of "Nossa Senhora da Ponte", home of Archdiocese of Sorocaba, located in the Plaza Coronel Fernando Prestes in downtown area of the city of Sorocaba, São Paulo, Brazil. It was built over 200 years. The cathedral is derived from the mother church of the second city, founded in 1771 when he arrived in Portugal the image Nossa Senhora da Ponte, which currently is at the main altar in style Baroque, 1771 .

Faculty of Medicine of Sorocaba

The Faculty of Medicine of Sorocaba is the original name of the School of Medical Sciences and Health (FCMS) of the Pontifícia Universidade Católica de São Paulo, which is the unit of PUC-SP dedicated to teaching and research in health. The FCMS has three courses: Medicine, Nursing and Biological Sciences. It is located in the city of Sorocaba (90 km from the capital) which has a population estimated by the IBGE (2009) of 584.313 inhabitants.

Estádio Municipal Walter Ribeiro, also known as Ninho da Garça, is a stadium in Sorocaba, Brazil. It has a capacity of 13,722 spectators. It is the home of Esporte Clube São Bento and of Clube Atlético Sorocaba.

The Municipal Zoological Park "Quinzinho de Barros" (the City Zoo of Sorocaba) is a 15-hectare zoo located in the municipality of Sorocaba, state of São Paulo, Brazil. It is a member of the Society of Brazilian Zoos (SZB), and is considered Brazil's second zoo in terms of species. The zoo lies in the Vila Hortência district, in the southern area of the town of Sorocaba and covers an area of approximately 15 ha . 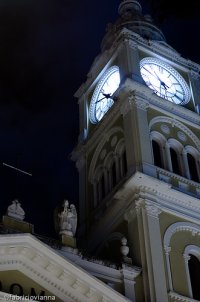