Local time in Anton is now 06:44 PM (Friday) . The local timezone is named " Europe/Sofia " with a UTC offset of 2 hours. Depending on your flexibility, these larger cities might be interesting for you: Timişoara, Bucharest, Zlatitsa, Vratsa, and Vasil'ovo. When in this area, you might want to check out Timişoara . We found some clip posted online . Scroll down to see the most favourite one or select the video collection in the navigation. Are you looking for some initial hints on what might be interesting in Anton ? We have collected some references on our attractions page.

Zlatina and her daughter Galia in the mountains above Koprivshtitsa. Galia is showing us how to defeat nausea ..

Another one video with remote signals from neighbour countries - nice surprise was ERA 2 at 94,8 from Pilion, central Greece/374km. & Resica at 105,6 from Semenic, SW Romania/339km.! Picture of mentio ..

Anton is a village in western Bulgaria, part of Sofia Province. It is the administrative centre of Anton Municipality, which lies in the easternmost part of Sofia Province. Anton is situated in the Zlatitsa–Pirdop Valley, 80 kilometres east of the capital Sofia. The village is the only place in the eponymous municipality, which has an area of 76 square kilometres and includes the Vartopa area, part of the Central Balkan National Park. Anton's old name was Ladzhene (Лъджене).

Anton Municipality is located in Sofia Province, Bulgaria. The administrative centre is in Anton, Bulgaria

The Elenska Basilica or Elensko Basilica (Bulgarian: Еленска базилика, Elenska bazilika) is a large partially preserved late Roman Christian basilica in west central Bulgaria. Dating to the 5th–6th century AD, it lies 5 to 6 kilometres (to mi) northeast of Pirdop and 3 kilometres from Anton, on the right bank of the Elenska (or Elensko) River (Еленска река, Elenska reka).

The Dushantsi dam is settled in the Balkan Mountains, Bulgaria. The dam wall can be easily reached by car, driving along the old road to Burgas. The area around the dam is used for outgoings, picnics, water sports and fishing. The Topolnitsa River feeds the dam, and is another suitable place for fishing.

Pirdop is a town located in South-West Bulgaria of Sofia Province in the southeastern part of the Zlatitsa - Pirdop Valley at 670 m above sea level. It is surrounded by the Balkan Range (also known as the Stara Planina) to the north, Sredna Gora Mountain to the south, and Koznitsa and Galabets saddles to the east and west, respectively. The town has a population of 8,040. 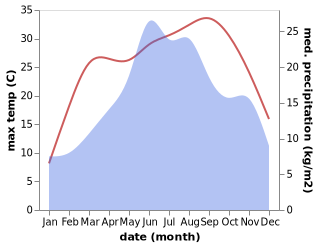