Lianjiangkou in the region of Heilongjiang Sheng is a town located in China - some 846 mi or ( 1361 km ) North-East of Beijing , the country's capital .

Local time in Lianjiangkou is now 05:01 AM (Thursday) . The local timezone is named " Asia/Harbin " with a UTC offset of 8 hours. Depending on your flexibility, these larger cities might be interesting for you: Vladivostok, Blagoveshchensk, Birobidzhan, Wangjiang, and Harbin. When in this area, you might want to check out Vladivostok . We found some clip posted online . Scroll down to see the most favourite one or select the video collection in the navigation. Are you looking for some initial hints on what might be interesting in Lianjiangkou ? We have collected some references on our attractions page.

The Songhua River or Sunggari River (Sunggari Ula) is a river in Northeast China, and is the largest tributary of the Heilong River (Amur), flowing about 1,434 kilometres from Changbai Mountains through Jilin and Heilongjiang provinces. The river drains 557,180 square miles of land, and has an annual discharge of 2,463 cubic metres per second . As the Second Songhua River, it joins the Amur at Tongjiang, Heilongjiang. 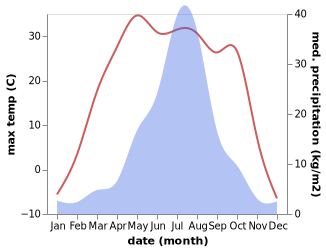