Local time in Chongshan is now 02:13 PM (Sunday) . The local timezone is named " Asia/Harbin " with a UTC offset of 8 hours. Depending on your flexibility, these larger cities might be interesting for you: Pyongyang, Hamhung, Vladivostok, Wangqing, and Mingyue. When in this area, you might want to check out Pyongyang . Are you looking for some initial hints on what might be interesting in Chongshan ? We have collected some references on our attractions page.

Taehongdan County is a kun, or county, in Ryanggang province, North Korea. It was originally part of Musan. To the north, Taehongdan looks across the Tumen River at China. It stands on the northwest edge of the Paekmu Plateau. The highest of its many peaks is Changchongsan (장청산). The chief river is the Tumen. Some 91% of the county's area is taken up by forestland. Due to its inland location, Taehongdan has a continental climate with cold winters. Logging is an important local industry. 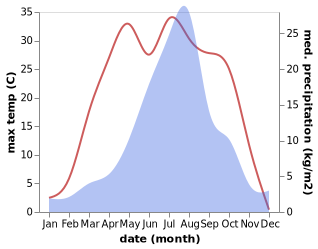