Time in Barranquilla is now 04:59 PM (Monday) . The local timezone is named " America/Bogota " with a UTC offset of -5 hours. Depending on your budget, these more prominent locations might be interesting for you: San Cristóbal, Mérida, Maracaibo, Valledupar, and Soledad. Since you are here already, consider visiting San Cristóbal . We saw some hobby film on the internet . Scroll down to see the most favourite one or select the video collection in the navigation. Where to go and what to see in Barranquilla ? We have collected some references on our attractions page.

Barranquilla is an industrial port city and municipality located in northern Colombia near the Caribbean Sea. The capital of the Atlántico Department, it is the largest industrial city and port in the Colombian Caribbean region with a population of 1,885,500 as of 2011 in its metropolitan area, which makes it Colombia's fourth most populous city after Bogotá, Medellín and Cali.

Barranquilla's Carnival is Colombia's most important folklore celebration, one of the biggest carnivals in the world. The carnival has traditions that date back to the 19th century. Forty days before Holy Week, Barranquilla decks itself out to receive national and foreign tourists, and join together with the city's inhabitants to enjoy four days of intense festivities.

More reading: Wikipedia Article
Located at 10.96 -74.80 (Lat./Long.); Less than 0 km away
Tags: Carnival in Colombia, Festivals in Colombia, Masterpieces of the Oral and Intangible Heritage of Humanity, Parades

Atlántico (English: Atlantic) is a department of Colombia, located in northern Colombia with the Caribbean sea to its north, the Bolívar Department to its west and south separated by the Canal del Dique, and the Magdalena Department to its east separated by the Magdalena River. It is the third smallest of the country's departments but its population of 2,272,170 makes it one of the most densely populated departments. Its capital is Barranquilla.

The Estadio Romelio Martínez, or Romelio Martínez Stadium, is a sports stadium located at 72 street and 46 Avenue in the Colombian city of Barranquilla. It has a capacity of 20,000 spectators. Until the construction of the Estadio Metropolitano Roberto Meléndez in 1986, the Romelio Martínez had been the city's primary stadium. It is currently the home of the Barranquilla F.C. soccer team, which plays in the second Colombian division.

The Pumarejo bridge is a bridge in Colombia built over the Magdalena River to connect the Island of Salamanca and the city of Barranquilla. The bridge was named after its promoter Alfonso López Pumarejo. Its construction was finished in 1974. The bridge is 1500 m (4921.25 ft. ) long and 12.50 m (41 ft. ) wide, and is built of concrete. 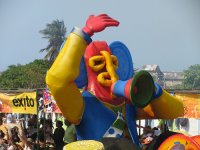 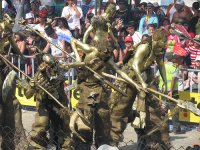 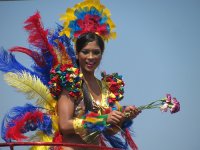 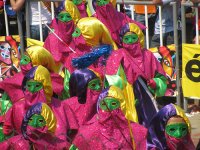