Okrisky in the region of Vysočina with its 2,016 citizens is located in Czech Republic - some 84 mi or ( 135 km ) South-East of Prague , the country's capital city .

Time in Okrisky is now 01:26 AM (Sunday) . The local timezone is named " Europe/Prague " with a UTC offset of 1 hours. Depending on your budget, these more prominent places might be interesting for you: Vienna, Sankt Pölten, Mödling, Krems, and Berlin. Being here already, consider visiting Vienna . We collected some hobby film on the internet . Scroll down to see the most favourite one or select the video collection in the navigation. Check out our recomendations for Okrisky ? We have collected some references on our attractions page.

MHRACING drifting on the ice road with Mitsubishi EVO VIII

Westmoravian College Třebíč is a private university in Třebíč. The college was founded in 2003 in place of the school ZŠ Za rybníkem in Borovina. The first class graduated in 2006. Approximately 700 students study at the school.

More reading: Wikipedia Article
Located at 49.21 15.85 (Lat./Long.); Less than 7 km away
Tags: Schools in Třebíč, Universities in the Czech Republic

Borovina is one of the town districts in Třebíč in the Czech republic and it has so-called new part and old part. In old part there are mainly family houses, then in younger part of Borovina there is many panel blocks of flats and it is near the town of Stařeč and it was built in the seventies of twentieth century.

Budíkovice is a small village in the Czech republic, approximately 4 kilometers north of the town of Třebíč. Budíkovice is in the district of Třebíč. The village is home to a chapel, a small swimming pool and notably just a single bus stop.

St. Procopius Basilica is a Romanesque-Gothic Christian church in Třebíč, Czech Republic. It was built on the site of the original Virgin Mary's Chapel of the Benedictine monastery in 1240-1280. It became a national cultural monument in 2002 as a part of the "monastery with St. Procopius church". The basilica together with the Jewish Quarter in Třebíč were inscribed as a UNESCO World Heritage Site in 2003. The basilica was originally dedicated to the Assumption of the Virgin Mary.

Třebíč District (Okres Třebíč in Czech) is a district in the Moravian part of Vysočina Region (Vysočina) in the Czech Republic. Its capital is city Třebíč, the second largest city in the Vysočina Region, after Jihlava. Village Senorady is (since January 1, 2005) part of Brno-Country District. 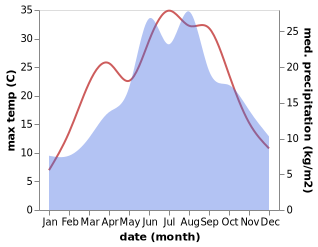