Discover Masina in Democratic Republic of the Congo

Masina in the region of Kinshasa with its 485,167 habitants is a town located in Democratic Republic of the Congo - some 7 mi or ( 12 km ) South-East of Kinshasa , the country's capital .

Local time in Masina is now 12:08 AM (Sunday) . The local timezone is named " Africa/Kinshasa " with a UTC offset of 1 hours. Depending on your flexibility, these larger cities might be interesting for you: Mbanza Congo, Pointe-Noire, Loubomo, Brazzaville, and Rifflart. When in this area, you might want to check out Mbanza Congo . We found some clip posted online . Scroll down to see the most favourite one or select the video collection in the navigation. Are you looking for some initial hints on what might be interesting in Masina ? We have collected some references on our attractions page.

Investing in Congo: The grace of giving

This is sermon by Barry Henning at New City Fellowship St. Louis, Missouri from 2nd Corinthians chapter 8 & 9 set to photos taken over the past several years during missions trips to Democratic Republ ..

hi guys ! I know it's been a long time since i've uppload a video but i've been very busy and working a lot this summer. I recently traveled to my home country Congo Dr and a cousin wanted for me to d ..

The 2007 Africa One Antonov An-26 crash occurred when a twin engine Antonov An-26, belonging to the Congolese air carrier Africa One, crashed and burned shortly after takeoff from N'djili Airport in Kinshasa, Democratic Republic of the Congo on October 4, 2007. The flight left N'djili at 10:43 local time bound for Tshikapa, a distance of 650 km to the east.

N'djili Airport, also known as N'Djili International Airport and Kinshasa International Airport, serves the city of Kinshasa and is the largest of the four international airports in the Democratic Republic of the Congo (DRC). It is named after the nearby Ndjili River. In 1998, N'Djili airport was the site of one of the decisive battles of the Second Congo War.

Stade Tata Raphaël (Father Raphael Stadium) is a multi-purpose stadium in Kinshasa, Democratic Republic of the Congo. Originally known as Stade Roi Baudouin (King Baudouin Stadium) when it was inaugurated in 1952 and Stade du 20 Mai (20th of May Stadium) in 1967, it was used mostly for football matches. Its most famous event was The Rumble in the Jungle boxing match between Muhammed Ali and George Foreman that took place on October 30, 1974.

N'Dolo Airport, also known as Ndolo Airport, is a secondary airport in the city of Kinshasa, Democratic Republic of the Congo, located in the commune of Barumbu near the city center. The Aviation militaire de la Force Publique was established here in October 1940 with requisitioned aircraft. Runways are limited to aircraft under 15,000 kg since the disastrous crash of January 8, 1996, in which an Antonov An-32 aborted takeoff and overran the runway 600 m into a market.

More reading: Wikipedia Article
Located at -4.33 15.33 (Lat./Long.); Less than 10 km away
Tags: Airports in the Democratic Republic of the Congo

Kalamu is a commune of the city of Boma in the Democratic Republic of the Congo. 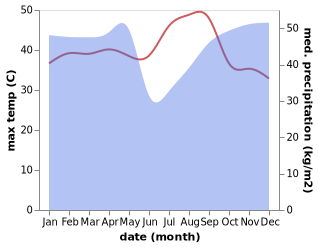