Local time in Basyun is now 01:10 PM (Tuesday) . The local timezone is named " Africa/Cairo " with a UTC offset of 2 hours. Depending on your flexibility, these larger cities might be interesting for you: Gaza, Tel Aviv, Beersheba, Zubaydah, and Izbat Zamzam al Kabirah. When in this area, you might want to check out Gaza . Are you looking for some initial hints on what might be interesting in Basyun ? We have collected some references on our attractions page.

Basyoun is a city in Egypt. It is located in Al Gharbiya Governorate.

Sais or Sa el-Hagar was an ancient Egyptian town in the Western Nile Delta on the Canopic branch of the Nile. It was the provincial capital of Sap-Meh, the fifth nome of Lower Egypt and became the seat of power during the Twenty-fourth dynasty of Egypt (c. 732–720 BC) and the Saite Twenty-sixth dynasty of Egypt (664–525 BC) during the Late Period. Its Ancient Egyptian name was Zau.

Naucratis or Naukratis,, loosely translated as "(the city that wields) power over ships" (Piemro in Egyptian, now Kom Gieif), was a city of Ancient Egypt, on the Canopic branch of the Nile river, 45 mi (72 km) SE of the open sea and the later capital of Ptolemaic Egypt, Alexandria. It was the first and, for much of its early history, the only permanent Greek colony in Egypt; acting as a symbiotic nexus for the interchange of Greek and Egyptian art and culture.

Xois was a town of great antiquity and considerable size. Situated nearly in the center of the Nile Delta in Egypt, it is identified as the ancient Egyptian city of Khasut or Khaset or Sakha.

Kafr ash Shaykh University,sometimes written in English as Kafr el-Sheikh University, earlier a branch of Tanta University, is located at Kafr ash Shaykh, in the middle of the Nile Delta. The University has a number of faculties (or colleges) such as: Arts, Education, Agriculture, engineering, Specific Education, Veterinary Medicine, science, commerce, physical education. 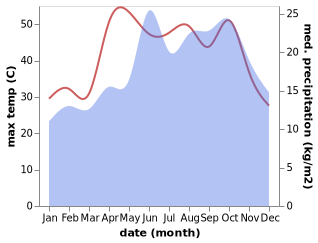