Delve into Gaza in Palestinian Territory

Gaza in the region of Gaza Strip with its 410,000 residents is located in Palestinian Territory - some 301 mi or ( 485 km ) South-East of East Jerusalem , the country's capital .

Local time in Gaza is now 06:48 AM (Tuesday) . The local timezone is named " Asia/Gaza " with a UTC offset of 2 hours. Depending on your mobility, these larger destinations might be interesting for you: Damascus, Amman, Tyre, Beirut, and Saknat az Zarqa. While being here, you might want to check out Damascus . We discovered some clip posted online . Scroll down to see the most favourite one or select the video collection in the navigation. Are you curious about the possible sightseeing spots and facts in Gaza ? We have collected some references on our attractions page.

Fatenah is a 27 year old woman living in the Gaza Strip. Her life is similar to the lives of many other women in Gaza. Her life changes the day she discovers to have breast cancer. This animation, the ..

Walid Shoebat vividly remembers the tumultuous days of June, 1967, when Israel and its Arab neighbours were at war. For six days and six nights, Walid and his family hid in the bathroom of their home ..

Fatenah is a 27 year old woman living in the Gaza Strip. Her life is similar to the lives of many other women in Gaza. Her life changes the day she discovers to have breast cancer. This animation, the ..

The Great Mosque of Gaza also known as the Great Omari Mosque is the largest and oldest mosque in the Gaza Strip, located in Gaza's old city. Believed to stand on the site of an ancient Philistine temple, the site was used by the Byzantines to erect a church in the 5th century, but after the Muslim conquest in the 7th century, it was transformed into a mosque. Described as "beautiful" by an Arab geographer in the 10th century, the Great Mosque's minaret was toppled in an earthquake in 1033.

Welayat Mosque or Kateb al-Welaya Mosque is a small historic mosque located along Omar Mukhtar Street in Gaza City in the Zaytoun Quarter of the old city. The mosque was built by the Mamluks in 1432, however, the structure could date as far back as 1344. Additions to the wstern part of the mosque were commissioned in 1584 by Ahmed Bey, the Ottoman clerk of Wilayat Dimashq, hence the name Kateb al Welaya ("the clerk of the state").

The Sayed al-Hashim Mosque is one of the largest and oldest mosques in Gaza, located in the ad-Darrāj Quarter of the Old City, off of al-Wehda Street. The tomb of Hashim ibn Abd al-Manaf, Muhammad's great grandfather who died in Gaza during a trading voyage, is located under the dome of the mosque according to Muslim tradition. A mosque and hostel have been located at the present site since at least the 12th century CE.

The First Battle of Gaza was fought on 26 March 1917 during the first attempt by the Egyptian Expeditionary Force (EEF) to invade the southern region of the Ottoman Empire territory of Palestine during the Sinai and Palestine Campaign of the First World War. Fighting took place in and around the town of Gaza on the Mediterranean coast when Desert Column part of the EEF, attacked the town.

The Battle of Gaza was a military conflict between Hamas and Fatah that took place between June 7 and 15, 2007 in the Gaza Strip. After winning Palestinian legislative elections in 2006, Hamas formed the Palestinan authority national unity government with Fatah in 2007, headed by Ismail Haniya. In June 2007 Hamas fighters took control of the Gaza Strip and removed Fatah officials. 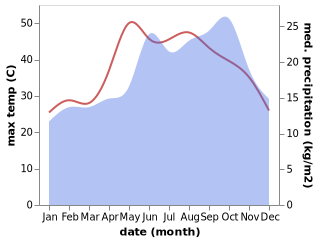