Jericho in the region of West Bank with its 19,783 citizens is a city located in Palestinian Territory - some 315 mi or ( 507 km ) South-East of East Jerusalem , the country's capital city .

Time in Jericho is now 06:02 PM (Saturday) . The local timezone is named " Asia/Hebron " with a UTC offset of 2 hours. Depending on your travel resources, these more prominent places might be interesting for you: Nicosia, Damascus, Latakia, Amman, and Al Karamah. Being here already, consider visiting Nicosia . We collected some hobby film on the internet . Scroll down to see the most favourite one or select the video collection in the navigation. Check out our recomendations for Jericho ? We have collected some references on our attractions page.

Monastery of the Temptation

The Monastery of the Temptation is an Orthodox Christian monastery located in the West Bank, along a cliff overlooking the city of Jericho and the Jordan Valley. It is built upon the summit of the Mount of Temptation, rising 350 meters above sea level. It currently serves as a tourist attraction and its land is under the full jurisdiction of the Palestinian National Authority, but the monastery is owned and managed by the Greek Orthodox Church of Jerusalem.

The Mount of Temptation is said to be the hill in the Judean Desert where Jesus was tempted by the devil. The exact location is unknown, and impossible to determine. It is generally identified with Mount Quarantania, a mountain approximately 366 m (1 200 feet) high, located about 11 km north-west of the West Bank town of Jericho. According to the public domain Catholic Encyclopedia, Quarantania is "a limestone peak on the road from Jerusalem to Jericho".

Hisham's Palace is an important early Islamic archaeological site five km north of the town of Jericho in the West Bank. It consists of three main parts: a palace, an ornate bath complex, and an agricultural estate. Also associated with the site is a large park or agricultural enclosure (hayr) which extends east of the palace. An elaborate irrigation system provided the complex with water from nearby springs.

Wadi Qelt or Nahal Prat is a valley or stream running west to east across the Judean desert in the West Bank, originating near Jerusalem and terminating near Jericho, near the Dead Sea. It is home to a variety of fauna including hyraxes to gazelles, to the Greek Orthodox Monastery Saint George, and to the oldest Jewish synagogue in the world and has been identified with the biblical "prat" mentioned in Jeremiah 13:5.

St. George Orthodox Monastery, or Monastery of St. George of Koziba is a monastery located in Wadi Qelt, in the eastern West Bank. The sixth-century cliff-hanging complex, with its ancient chapel and gardens, is active and inhabited by Greek Orthodox monks. It is reached by a pedestrian bridge across the Wadi Qelt, which many imagine to be Psalm 23's Valley of the Shadow. The valley parallels the old Roman road to Jericho, the backdrop for the parable of the Good Samaritan . 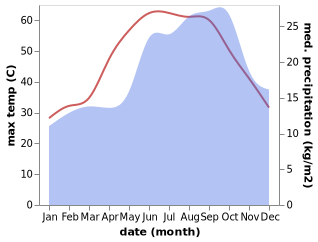