Time in Viljandi is now 03:36 PM (Wednesday) . The local timezone is named " Europe/Tallinn " with a UTC offset of 2 hours. Depending on your budget, these more prominent locations might be interesting for you: Riga, Daugavpils, Pskov, Viljandi, and Viiratsi. Since you are here already, consider visiting Riga . We saw some hobby film on the internet . Scroll down to see the most favourite one or select the video collection in the navigation. Where to go and what to see in Viljandi ? We have collected some references on our attractions page.

GTA Vice City Stories Gameplay on PC using PCSX2 9.8 Here you go a video, where you see gameplay of Grand Theft Auto Vice City Stories, which is unfortunately released only for PS 2 and PSP. I am play ..

Ugala is a theatre in the city of Viljandi in Estonia. It was founded in 1920 opening on January 10 of that year.

University of Tartu Viljandi Culture Academy (Estonian: Tartu Ülikooli Viljandi Kultuuriakadeemia) is an Estonian institution of higher education, situated in the provincial town of Viljandi, central Estonia. The UT Viljandi Culture Academy merged with the University of Tartu in 2005. The UT VCA has been teaching professional higher education and performing applied research within information science, culture education and creative arts since 1952.

Viljandi castle of Teutonic Order, construction of which started 1224 in place of a former hillfort, was one of the strongest castles in Livonia. Finally destroyed in the Polish-Swedish wars in early 17th century, ruins of it now form a popular resort area in Viljandi, Estonia.

More reading: Wikipedia Article
Located at 58.36 25.59 (Lat./Long.); Less than 1 km away
Tags: 13th-century establishments in Estonia, Buildings and structures in Viljandi County, Castles in Estonia, Castles of the Livonian Order

Viljandi linnastaadion is a multi-purpose stadium in Viljandi, Estonia. It is used mostly for football matches and hosts the matches of FC Viljandi. The stadium has 1,006 seats of which 400 are under the roof. 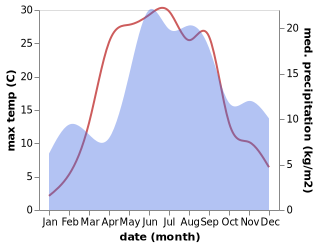