Time in Vani is now 09:21 AM (Tuesday) . The local timezone is named " Asia/Tbilisi " with a UTC offset of 4 hours. Depending on your travel resources, these more prominent places might be interesting for you: Erzincan, Grozny, Zugdidi, Zestap'oni, and Zemo Surebi. Being here already, consider visiting Erzincan . We collected some hobby film on the internet . Scroll down to see the most favourite one or select the video collection in the navigation. Check out our recomendations for Vani ? We have collected some references on our attractions page.

Some dancers in Samtredia perform a traditional Georgian dance from the region of Ratcha. ..

Some 6th grade students of English in Georgia sing a song they learned for Halloween, based on "The 12 Days of Christmas." ..

Vani is a town in Imereti region of western Georgia, at the Sulori river (a tributary of the Rioni river), 41 km southwest from the regional capital Kutaisi. The town with the population of 4,600 (2002 est. ) is an administrative center of the Municipality of Vani comprising also 43 neighbouring villages (total area – 557 km²; population – 34,000, 2002 est.). Systematic archaeological studies (N. Khoshtaria, O.

Geguti is a Georgian medieval royal palace, now in ruins, at the omonymous village, 7 km south of the city of Kutaisi, Georgia. The ruins of the Geguti palace complex occupy the area of over 2,000 m along the Rioni River.

Givi Kiladze Stadium is a multi-use stadium in Kutaisi, Georgia used mostly for football matches. It is the home stadium of FC Torpedo Kutaisi. The stadium is able to hold 12,000 people. 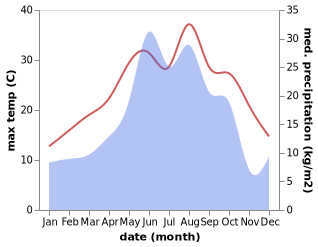