Local time in Argos is now 03:47 PM (Monday) . The local timezone is named " Europe/Athens " with a UTC offset of 2 hours. Depending on your flexibility, these larger cities might be interesting for you: Tolo, Lacedaemon, Patras, Pasas, and Nea Tirins. When in this area, you might want to check out Tolo . We found some clip posted online . Scroll down to see the most favourite one or select the video collection in the navigation. Are you looking for some initial hints on what might be interesting in Argos ? We have collected some references on our attractions page.

Korinna explores the castle of Larissa above Argos. Three building phases are visible along with an archaic inscription and spolia. ..

The region of Argos explored by Samson. Check out the ancient theatre of Argolis and the ruins of Argos. Papa-Mac Productions. ..

Larissa is the ancient and medieval acropolis of Argos, located in a high rocky hill, within the town's boundaries. It is named after the nymph Larissa.

Akova is a settlement in the community and municipal unit of Argos, Greece. Akova is 4 km west of downtown Argos. There are an Agia Triada church and a rest area for those hiking around Larissa mountain.

The Inachos is a river in the Peloponnese, southern Greece. Its source is in the mountains of western Argolis, near the village Kaparelli. It flows into the Aegean Sea in Nea Kios. The Inachos was named after Inachus, a mythical king of Argos, who introduced civilization to the area.

Merbaka, but officially Agia Trias (Αγία Τρίας, "Holy Trinity"), is a village in the province of Argolis, in the Peloponnese near Argos, Greece. Merbaka is thought to have been named for William of Moerbeke, a 13th-century Roman Catholic archbishop of Corinth, scholar and Philhellene from Flanders. A roughly contemporaneous Byzantine-Gothic Church of the Dormition in the village may have been built under his auspices.

Tiryns is a Mycenaean archaeological site in Argolis in the Peloponnese, some kilometres north of Nauplion. 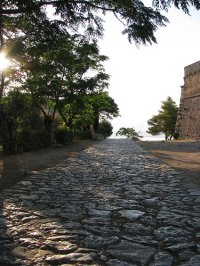 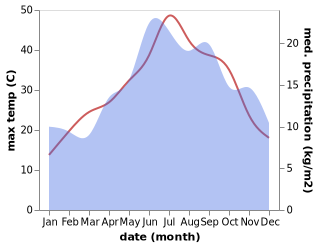