Current time in Ambarawa is now 04:25 AM (Thursday) . The local timezone is named " Asia/Jakarta " with a UTC offset of 7 hours. Depending on the availability of means of transportation, these more prominent locations might be interesting for you: Yogyakarta, Ungaran, Tingkirtengah, Tengaran, and Tayu. Since you are here already, make sure to check out Yogyakarta . We encountered some video on the web . Scroll down to see the most favourite one or select the video collection in the navigation. Where to go and what to see in Ambarawa ? We have collected some references on our attractions page.

Ambarawa is a market town located between Semarang and Salatiga in Central Java, Indonesia. Ambarawa was an important connecting rail link providing a cog railway connecting through Central Java as far as Yogyakarta via Magelang. The Semarang-Ambarawa-Magelang line was fully operational until 1977 . It is the site of the Museum Kereta Api Ambarawa. Ambarawa was the site of Japanese interment camps where up to 15,000 Europeans had been held during the Japanese occupation during World War II.

The Ambarawa Railway Museum, (Indonesian: Museum Kereta Api Ambarawa) is a museum located in Ambarawa in Central Java, Indonesia. The museum focuses on the collection of steam locomotives, the remains of the closing of the 3 ft 6 in railway line.

Rawa Pening (literally meaning 'Clear Swamp', from the Javanese Bening) is a lake in the Ambarawa Basin in Central Java, Indonesia. It serves as a source of power, irrigation, and flood control, and is used for fishing. Due partly to high numbers of aquatic plants, it may dry out by 2021.

Gedong Songo (Indonesian: Candi Gedong Songo) is a Hindu temple located in Central Java, Indonesia. The site was originally built during the Sanjaya dynasty which controlled Central Java during the 8th and 9th centuries. Similar to Dieng Plateau, Gedong Songo was erected out of volcanic stone and the two complexes represent the oldest Hindu structures in Java. Dieng and Gedong Songo predate Borobudur and Prambanan.

Mount Telomoyo is a stratovolcano in Central Java, Indonesia. The volcano was constructed over the southern flank of the eroded Pleistocene-age Soropati volcano, which has a height of 1,300 metres . The Soropati volcano collapsed during the Pleistocene, leaving a U-shaped depression. Mount Telomoyo grows on the southern side of the depression, reaching over 600 metres above the depression's rim. 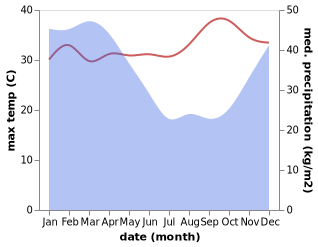