Delve into Nasiriyah in Iraq

Current time in Nasiriyah is now 02:31 PM (Sunday) . The local timezone is named " Asia/Baghdad " with a UTC offset of 3 hours. Depending on your travel modalities, these larger destinations might be interesting for you: Zubayr, Ur Junction, Umm as Sadd, Qal'at Hawli, and Karbala. While being here, make sure to check out Zubayr . We encountered some video on the web . Scroll down to see the most favourite one or select the video collection in the navigation. Are you curious about the possible sightsseing spots and facts in Nasiriyah ? We have collected some references on our attractions page.

Buried Alive - The Ruins of Ur

As you'll hear in this clip, servants and guards were buried alive here. Watch the video to find out what we think happened in their last hours... ..

This was my farewell from Iraq. It seemed like this day would never come? But as a solider, I knew my journey was filled with, Bad and Good times. Some time I hope I can say that everthing we did was ..

The Battle of Nasiriyah was fought between the US 2nd Marine Expeditionary Brigade and Iraqi forces, from March 23 to April 2, 2003, during the US-led invasion of Iraq. Nasiriyah is a city which lies along the banks of the Euphrates River, in Dhi Qar Province, about 225 miles southeast of Baghdad, with its population being made up almost entirely of Shiite Muslims.

Nasiriyah is a city in Iraq. It is on the Euphrates about 225 miles (370 km) southeast of Baghdad, near the ruins of the ancient city of Ur. It is the capital of the province of Dhi Qar. According to the 1987 census the city had a population of 265,937 people; the estimated population in 2003 was 560,200. The population of Nasiriyah is nearly exclusively Shī‘a Muslims with small Mandaean and Sunni muslim communities, until 1951 the town was a home to a sizable Jewish community.

An Nasiriyah Stadium, is a multi-use stadium in An Nasiriyah, Iraq. It is currently used mostly for football matches and serves as the home stadium of An Nasiriyah FC. The stadium holds 10,000 people.

The Nasiriyah Drainage Pump Station is a land drainage pumping station in Iraq 10km southeast of Nasiriyah in the province of Dhi Qar. The station pumps farm run-off collected by the Main Outfall Drain (MOD) north of the Euphrates River in Dhi Qar and Muthanna provinces to a siphon under the Euphrates where it is then returned to the MOD and eventually discharged in the Persian Gulf. 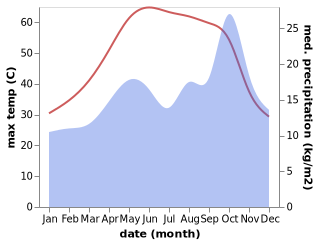