Local time in Galway is now 04:14 AM (Sunday) . The local timezone is named " Europe/Dublin " with a UTC offset of 0 hours. Depending on your flexibility, these larger cities might be interesting for you: Derry, Belfast, Tralee, Sligo, and Oranmore. When in this area, you might want to check out Derry . We found some clip posted online . Scroll down to see the most favourite one or select the video collection in the navigation. Are you looking for some initial hints on what might be interesting in Galway ? We have collected some references on our attractions page.

This is a short video we created over the summer months 2012, we tryed to capture a little of what Galway is about and how beautiful this wonderful City and County is, hope you like it. Please share i ..

"I've Got a Funny Feelin'" performed by Slim Attraction (Paul Rooney) and The Country Kings. Broadcast on TG4 as part of "Glór Tíre" 2011 - Slim is a contestant this year and has Robert Mizzell as his ..

Galway based AWOL Tattoos and Piercing is a new family run tattoo studio located at 2 Newtownsmith in Galway City close to Shop St and Eyre Square. on.fb.me As a team they bring a highly professional, ..

Galway (Ceannt) railway station (Ceannt Station / Stáisiún Cheannt) serves the city of Galway in County Galway. The station itself is located in the centre of the city in Eyre Square. It is the terminus station for the Dublin to Galway intercity service and the Limerick to Galway and Athenry to Galway commuter services.

The Collegiate Church of St. Nicholas is the largest medieval parish church in Ireland in continuous use as a place of worship. It is located in Galway in the Republic of Ireland and was founded in 1320, dedicated (like many other European churches in seaports) to Saint Nicholas of Myra, the patron saint of seafarers. The church now belongs to the Church of Ireland.

The Spanish Arch (Irish: An Póirse Spáinneach) in Galway city, Ireland, was originally an extension of the city wall from Martin's Tower to the bank of the Corrib, as a measure to protect the city's quays, which were located in the area once known as the Fish Market (now Spanish Parade). It was constructed during the mayoralty of Wylliam Martin in 1584, being called ceann an bhalla (the head of the wall).

The River Corrib (Irish Abhainn na Gaillimhe) in the west of Ireland flows from Lough Corrib through Galway to Galway Bay. The river is among the shortest in Europe, with only a length of six kilometres from the lough to the Atlantic. It is popular with local whitewater kayakers and is the training ground of NUI, Galway Kayak club, as well as several rowing clubs. The depth of this river reaches up to 94 feet.

Cathedral of Our Lady Assumed into Heaven and St Nicholas, Galway

The Cathedral of Our Lady Assumed into Heaven and St Nicholas, commonly known as Galway Cathedral, is a Roman Catholic cathedral in Galway, Ireland, and is one of the largest and most impressive buildings in the city. Construction began in 1958 on the site of the old city jail, and in 1965 was finally dedicated by Cardinal Richard Cushing to Our Lady Assumed into Heaven (Mary, mother of Jesus) and St Nicholas.

More reading: Wikipedia Article
Located at 53.28 -9.06 (Lat./Long.); Less than 1 km away
Tags: Buildings and structures in Galway (city), Places of worship in County Galway, Roman Catholic Diocese of Galway, Kilmacduagh and Kilfenora, Roman Catholic cathedrals in the Republic of Ireland 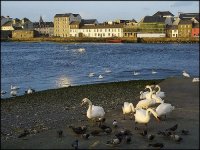 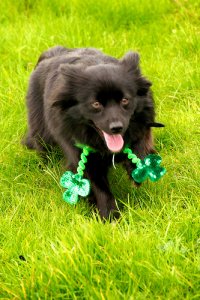 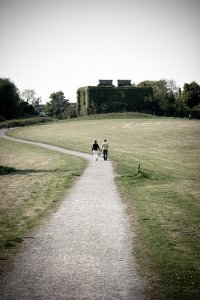