Current time in Irbid is now 08:31 PM (Saturday) . The local timezone is named " Asia/Amman " with a UTC offset of 3 hours. Depending on the availability of means of transportation, these more prominent locations might be interesting for you: Nicosia, Aleppo, Damascus, Natifah, and Kafr Yuba. Since you are here already, make sure to check out Nicosia . We saw some video on the web . Scroll down to see the most favourite one or select the video collection in the navigation. Where to go and what to see in Irbid ? We have collected some references on our attractions page.

Irbid, known in ancient times as Arabella or Arbela, is the capital and largest city of the Irbid Governorate. It also has the second largest metropolitan population in Jordan after Amman, with a population of around 660,000, and is located about 70 km north of Amman on the northern ridge of the Gilead, equidistant from Pella, Beit Ras, and Um Qais. The city of Irbid is the third largest city in Jordan by population. Metropolitan Irbid is the second largest.

Al-Hasan Stadium is a multi-purpose stadium in Irbid, Jordan. It is currently used mostly for football matches. The stadium holds 15,000 people.

Natifah is a village in Jordan approximately 2 km south-west of Irbid.

Bushra (Bishra) is a town in the governorate of Irbid that rises 560 meters above sea level. It is located to the East of the municipality and town of Irbid 3 km, and is bounded on the North by the towns of judgement and Beit RAS (Roman kabitalios), to the South by the town of Hawara, and on the East by the town of Sal.

Dion (alternatively Adun, Idoun, or Aydoun) is the name of an ancient city, which was a member of the Decapolis during the classical period. The exact location of the city is still disputed, but is thought to be a site site near Al Hisn currently known as Aydoun, around the city of Irbid in Jordan. 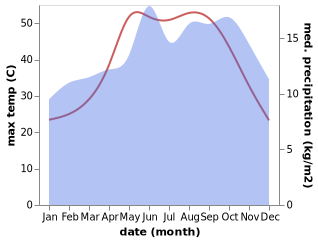